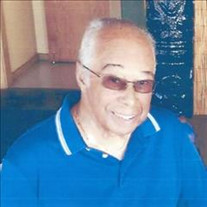 William (Bill) Scotland Harris Jr. was surrounded by loving family when he passed from this life on Monday, June 28, 2021. In the days before, he experienced the miracle of meeting and spending time with his great-grandson Landon. Bill was born on August 1, 1925 in Baltimore, Maryland to the late Edna M. (Reid) Harris and the late William S. Harris Sr. He shared stories of his boyhood times in Baltimore growing up with his younger sister, the late Gloria D. (Harris) Moore and his younger brother, the late Clarence J. (Sonny) Harris. Bill especially looked forward to his job, as the eldest, taking dinners prepared by his mother to his father (referred to by community folks as Doc Harris), who worked as a pharmacist at Weavers Pharmacy, a few blocks from their home. The family moved from Baltimore to Philadelphia in 1937, when Bill was 12 years old. They lived on Vine St., in West Philadelphia. Bill recalled a vibrant, culturally diverse neighborhood full of friendships and activities. He and his brother Clarence would go on to attend the West Philadelphia High School, where Bill honed his no nonsense commitment to doing it "Bill's Way" by ignoring the taunts he received all around for playing and excelling at tennis. He graduated in 1943. Right after graduating, at the ripe young age of 17, Bill joined the U.S. Marine Corps. This was a historic era for the Corps, when it began recruiting African American men for the first time, for an all Black unit trained at the segregated facility in Montford Point, North Carolina. Bill was among the approximately 20,000 African-American men who joined the Marine Corps between 1942 and 1949. More than 13,000 African American men served overseas during World War ll. Bill served in the Corps from 1943 to 1952. He served in the Pacific Corridor � in the Japanese Theater, primarily in the Marshall Islands. It was during that time that he had his introduction to the Hawaiian Islands. Little did he know then, that he was to return and that Moloka'i would become his heart home and that he would become a Kama'aina (true resident of Hawai'i). On August 27, 2012 former Sargent William S. Harris Jr., a World War ll Montford Point Marine received the Congressional Gold Medal, at Kaneohe Marine Corps Base, Hawai'i for his service and for the discrimination he endured while serving in the Corps. In receiving the award he joined the ranks of several hundred other Montford Point Marines, who had received this honor in June, 2012, at the U.S. Capitol. After he was discharged from the Marine Corps, Bill made California his home. His leadership roles in the Marines had prepared him well for moving through the management ranks at the California Department of Corrections, Kaiser Steel and California Steel industries In 1967 the late Irene Harris and Bill welcomed their son Scott Landon Harris. In 1976 Bill and the late Dorothy (Dottie) Harris and Chris Harris became a family. It was during summer vacations that Scott and Chris would travel back to Philadelphia with Bill to connect with grandparents, aunts, uncles, cousins and close family friends. In the early 1980s Bill and Dottie began their travels to Hawai'i. During their first trip they visited several islands. When they finally got to Moloka'i they knew they were home. Long, colorful nights at the Pau Hana Inn and rich, enduring friendships complemented the quiet, deep beauty that was Moloka'i for them. Each year, they would return and return deepening their connection to the aina (land) and Kama'aina (people of the land). The connection was so strong that they named their houseboat on Lake Meade, right outside of Las Vegas, Pau Hana. After decades of visiting Moloka'i they decided to make it their permanent home. Bill lived on Moloka'i for 20 years and never tired of his quiet life there. His spiritual community was Grace Episcopal Church, which held him in close embrace. During his long illness he would often share that the community on Moloka'i and the congregation of Grace Episcopal Church were sources of great spiritual and physical support. Bill enjoyed good times with friends. He enjoyed watching the whales from his Moloka'i perch and he enjoyed soothing, soul-drenching jazz. Bill is survived by his sons Scott and Chris Harris, his grandson Corey Harris and granddaughter Brooke Harris and his great-grandson Landon Harris, his daughter-in-law Cindi Harris, granddaughter-in-law Elizabeth Harris, nieces Rosalind Harris, Barbara Harris-Jones and Dyane Moore-Boyd, nephews Gary, Mark, Bruce and Michael Harris and many grand and great nieces and nephews and many, many good friends.

William (Bill) Scotland Harris Jr. was surrounded by loving family when he passed from this life on Monday, June 28, 2021. In the days before, he experienced the miracle of meeting and spending time with his great-grandson Landon. Bill was... View Obituary & Service Information

The family of William Harris created this Life Tributes page to make it easy to share your memories.

Send flowers to the Harris family.