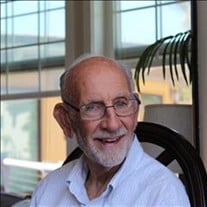 Bill Dixon passed away peacefully in his home in Tulare, CA, from idiopathic pulmonary fibrosis, early on Monday, August 16, at the age of 79. Bill was born William Robert Dixon, III, on December 30, 1941, in Homestead, Pennsylvania, to W. Robert and Dorothy Dixon. He was the middle of three children. Bill contracted polio at five years of age and was paralyzed in both arms and legs. He was put into a crippled children's hospital and his parents were told he would never leave. Looking for hope, they reached out to church prayer chains and Bill walked out completely healed. That experience brought his family to faith in Christ. The family moved to Corona, CA when Bill was 14 years old. He attended Corona High School and served in the Army from March 1964 to March 1966, the last nine months serving in Vietnam. Bill met Wanda Schoneveld in high school, but they didn't date until he returned from the service. They were married January 20, 1967, in Chino, CA and had four children. Bill was an elder in his church for 50 years, served on the boards of both Salem Christian Homes and Central Valley Christian Schools. Bill was a jack of all trades, truck driver, construction worker, dairyman, but was hoof trimmer for 43 years in both southern and central California. Bill enjoyed riding motorcycles, waterskiing, doing tricks off the diving board and sharing his faith and the love of Jesus with everyone he met. He served at the Tulare Healing rooms for many years and regularly visited the local jail to share the hope of Jesus. He would also visit friends and pray with those who were sick or discouraged. He loved a good joke, eating snacks and telling stories. He had an amazing ability to talk with anyone and listen well. He always had a life lesson to share that would empower and encourage. And he prayed daily through a very long list, by name, of family and friends, at times over 300 names. If you shared a prayer request with him, you were included on that list and were lifted before the throne. He is survived by his loving wife Wanda of 54 years, daughters Sharon (Rick) Browatzke of Fresno, Carol (James) Knevelbaard of Iowa, sons Evert (Raquel) Dixon of Visalia and Eric (Aften) Dixon of Tulare, 15 grandchildren Jacob, Levi, Nathan, Aaron and Abigail Browatzke, Mitchell and Emily Knevelbaard, Justin (Brittni) Dixon, great granddaughter Tatum, Kathryn and Evan Dixon, Conley, Colton, Caiden, Corbin and Collin Dixon, sister Barbara Harris and brother David Dixon and sister-in-law Alice Kaye (Jim) Staal and numerous nieces, nephews and countless friends. Bill was preceded in death by his parents, Bob and Dorothy, his brother-in-law Doug Harris and sister-in-law Cheryl Dixon and in-laws, Evert "Ed" and Esther Schoneveld, Tony and Alice Elaine Schoneveld and Ronald Schoneveld. The viewing will be held on Friday, August 20, 2021, from 5 - 8pm and the Celebration of Life will be held on Saturday, August 21, 2021, at 10 am, both to be held at Tulare Community Church, 1820 N Gem St, Tulare, CA. A military burial will take place at the Bakersfield National Cemetery later in the week. Two of Bill's favorite verses are : Proverbs 3:4-5 "Trust in the LORD with all your heart and lean not on your own understanding. In all your ways acknowledge him and he will make your paths straight." Romans 8:38-39 38 For I am convinced that neither death nor life, neither angels nor demons, neither the present nor the future, nor any powers, 39 neither height nor depth, nor anything else in all creation, will be able to separate us from the love of God that is in Christ Jesus our Lord. Cards can be sent to Wanda Dixon at PO Box 8093 Visalia, CA 93290. Flowers can be sent to Tulare Community Church for Bill Dixon at 1820 N Gem St, Tulare, CA 93274. Gifts in memoriam of Bill Dixon can be made to either Central Valley Christian Schools at 5600 W Tulare Ave, Visalia, CA 93277 www.cvc.org or World Impact, Inc, 2001 S Vermont Ave, Los Angeles, CA 90007

Bill Dixon passed away peacefully in his home in Tulare, CA, from idiopathic pulmonary fibrosis, early on Monday, August 16, at the age of 79. Bill was born William Robert Dixon, III, on December 30, 1941, in Homestead, Pennsylvania, to W.... View Obituary & Service Information

The family of William Robert Dixon, III created this Life Tributes page to make it easy to share your memories.

Bill Dixon passed away peacefully in his home in Tulare, CA,...

Send flowers to the Dixon family.