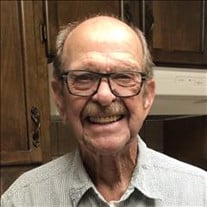 William "Bill" G. Chastain, 90 of Visalia, California, died on July 07, 2021, in Tulare, California. William was born to Fred Anderson Chastain and Anna Mae Woods on March 6, 1931 in Depew, Oklahoma. Bill grew up in Visalia, California and graduated from Visalia High School now known as Redwood High School. He was proud to have served during the Korean War for the United States Army. He married Wanda Louise Hestily on January 13, 1951, in Visalia, California. Together they raised their two children and enjoyed traveling in their motor home or their house boat, going fishing and tending to their garden. He owned and operated his own Beacon Gas Station for over 35 years. He is survived by one daughter, Lori Baker (Jeff); three grandchildren, Joshua Chastain (Vanessa), Casey Chastain, and Lauren Baker (Jenny); two great-grandchildren, Brooke and Brody Chastain; and two brothers, Ron and Kenny Chastain. He is preceded in death by his wife Wanda Louise Chastain; one son, Lynn Gregg Chastain; two grandsons, Jared Baker and Christopher Baker; one brother and two Sisters. Bill will truly be missed by all. Graveside services will be held 9:00 AM Friday, July 16th, 2021 at Visalia District Cemetery, 1300 W Goshen Ave, Visalia. Services have been entrusted to Salser & Dillard Funeral Chapel. Memorial Tributes and condolences may be offered by logging onto www.salseranddillard.com.

The family of William G Chastain created this Life Tributes page to make it easy to share your memories.

Send flowers to the Chastain family.