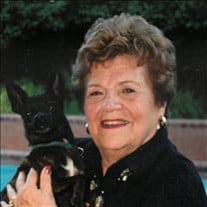 Willadene Reitz (aka Willa, Willie, Mom, Gramma, GrayMo, Gigi) passed away peacefully on April 8, 2021, at her home in Visalia. She was 91 years old and didn't look a day over 75! She was born to Cy and Zora Stearns on August 23,1929, in Sioux City, Iowa. The family moved to Visalia when Willie was 9 years old and she began attending the 4th grade at Washington School. She graduated from Visalia Union High School in 1947 and then from College of the Sequoias 2 years later. Willadene loved writing and had dreams of being an investigative journalist for the Los Angeles Times. To gain experience for her future career, she began working at the Visalia Times-Delta at age 15 as a proof reader and eventually worked her way up to the position of Society Editor. Willie's career plans took a backseat to building a family when she met and married Kenneth Reitz of Exeter. They married in 1950, and raised two children Valletta and Bryan. Together, Willie and Ken owned and operated a successful underground pipeline construction company for 18 years. Kenny was the first to admit that he couldn't have done it without her. Wille later worked for Family Planning Program in Visalia for 14 years, retiring as Director of Administration in 1993. Active in community affairs, she served on the City of Visalia Retired Senior Volunteer Program Board of Directors and worked a term on the City of Visalia Parks and Recreation Commission. In 2003, she was presented with the Women of Distinction Award by Soroptimist International of Visalia for her community volunteer service. Always an animal lover, Willie was an active volunteer for PUPP (Prevent Unwanted Pet Population) and was one of the founders of Valley Oak SPCA where she volunteered since its inception and worked as a member of the Board of Directors for over 20 years. Mom will be remembered most for her ability to laugh and have fun, be the ultimate hostess, cook amazing meals for the family and write special poems for her family's birthday cards. She was a smart businesswoman, a devoted friend and family member and an extremely strong person to the very end. Willadene is survived by her two children, Bryan Reitz (Wendy) of Visalia and Valletta Lochridge (Ed) of Exeter; her grandchildren Alison Delgado (Steven) of Visalia, Kyle Lochridge (Julie) of Los Angeles, Ali Greathouse (Tyler) of Oakhurst, Josh Costa and Shane Costa (Brittane); great-grandchildren Ellee, Naomi, Quorra, Leela, Roman, Malcolm and Kyzer; and many long-time friends. Graveside services will be held Thursday April 15th at 9:00am at the Visalia Cemetery. Memorial Tributes and Condolences may be offered by logging onto www.salseranddillard.com

Willadene Reitz (aka Willa, Willie, Mom, Gramma, GrayMo, Gigi) passed away peacefully on April 8, 2021, at her home in Visalia. She was 91 years old and didn't look a day over 75! She was born to Cy and Zora Stearns on August 23,1929, in Sioux... View Obituary & Service Information

The family of Willadene Reitz created this Life Tributes page to make it easy to share your memories.

Send flowers to the Reitz family.