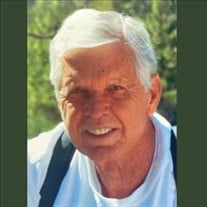 Waymon Roberson died on February 11, 2022 at age 86 from Parkinson's Disease. He was born in Hamilton, Texas on May 9. 1935, Four years later, his parents, Myrtle and Luther Roberson, along with his older brother Bill, moved to Strathmore, California. Waymon attended Strathmore schools until he graduated in 1954. After graduating high school, he enlisted in the U.S. Army and was stationed in Germany for two years. Upon returning to this country, he began a 34-year career with Southern California Edison. Upon retirement, he owned and operated Sierra Flight Center at the Visalia Municipal Airport. It was abundantly clear to all that the center of Waymon's universe was his family�to whom he was completely devoted. Waymon is survived by his wife Lynda Burr Roberson, to whom he was married for 60 years. He is survived by his children, as well: Leigh Ann Spitzer (Dennis) and Waymon Bradley Roberson (Susan). He is also survived by his grandchildren: Lindsay and Hunter Spitzer (Hope), and Jenna and Bailey Roberson. Waymon and Lynda raised their family in Lindsay, until they moved to Visalia in 2000. While living in Lindsay, Waymon was actively involved in the United Methodist Church. He was also involved with civic matters as a member of the Lindsay City Council, and he served as mayor. Waymon was an avid sports fan. Although he took up running in his middle-age years, his one true passion for most of his life was playing golf. He also enjoyed card games and belonged to several different contract bridge groups. He enjoyed years of camping, traveling in their RV, and making several summertime river-rafting trips to Montana. Waymon will be remembered fondly for his quick wit and welcoming, friendly manner�qualities that will be deeply missed by his friends and family. Waymon's family would like to express their deep gratitude to Dr. Bruce Hall for his ongoing medical care for Waymon over the years. In more recent years, they've appreciated the care of John Briggs with Kaweah Health Hospice. A memorial service will be held on Saturday, March 26, 2022 at 10 AM at the United Methodist Church, Lindsay. In lieu of flowers, memorial donations may be sent to the United Methodist Church, 132 N. Gale Hill, Lindsay, CA 93247, or Kaweah Health Hospice, 623 W. Willow, Visalia, CA 93291. Services have been entrusted to Salser & Dillard Funeral Chapel. Memorial Tributes and condolences may be offered by logging onto www.salseranddillard.com.

Waymon Roberson died on February 11, 2022 at age 86 from Parkinson's Disease. He was born in Hamilton, Texas on May 9. 1935, Four years later, his parents, Myrtle and Luther Roberson, along with his older brother Bill, moved to Strathmore, California.... View Obituary & Service Information

The family of Waymon Lee Roberson created this Life Tributes page to make it easy to share your memories.

Send flowers to the Roberson family.