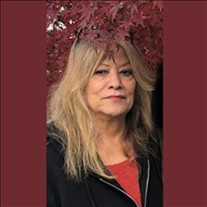 Vivian Nunez, 69 of Visalia, California, died on October 12, 2021, in Visalia, California. Vivian was born to Manuel Lucero and Avelia J Jaramillo on February 19, 1952 in Visalia, California. Vivian grew up in Visalia where she attended Redwood Highschool. She was a true caregiver and began taking care of others at a very young age. Although she loved taking a little time away during the summers when she would travel to Salinas to work at Christopher Farms. She also enjoyed traveling with her family to New Mexico and her second home in Morro Bay and Cayucos. Vivian met Paul Nunez Sr. in the summer of 1976, and they were both certain that forever their lives would be changed and they later married August 25, 1979, in Exeter, CA. Her pride and joy was her family and taking care of them. When she wasn't caring for her family she was tending to her garden and house plants. She had an amazing green thumb, which she was very proud of. Vivian was also a wealth of knowledge when it came to homeopathic medicine. Vivian was the pillar and strength of her entire family She is survived by two children, Lisa Nunez-Bray (Todd) and Paul Nunez Jr. (Jennifer Garcia); nine grandchildren, Myriah Nunez, Paul Martin Nunez III, Genevieve Rodriguez, Destiny Rodriguez, Fabricio Rodriguez, Pablo Isiah Rodriguez, Josiah Rodriguez, Brooklyn Jaramillo and Bella Rodriguez; three great-grandchildren, Madison Cole, Mason Cole and Isabel Rodriguez; and three siblings, David Lucero, Sarah Lucero, and Anna Lucero. She is preceded in death by her mother, Avelia J Lucero and two siblings, Cindy L. Garza and Manuel Lucero Jr. Vivian will truly be missed by all and with God's promise, we know we will see her again Graveside services will be held 12pm Monday, October 25th, 2021 at Visalia District Cemetery, 1300 W Goshen Ave, Visalia. Services have been entrusted to Salser & Dillard Funeral Chapel. Memorial Tributes and condolences may be offered by logging onto www.salseranddillard.com.

The family of Vivian Nunez created this Life Tributes page to make it easy to share your memories.

Send flowers to the Nunez family.