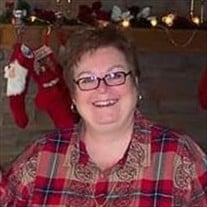 Virginia Diane Kaus (72) of Visalia California passed away at Kaweah Delta Medical Center on September 10, 2021. She was born on November 26, 1948 at Wright Patterson Air Force Base in Fairborn Ohio and was the first daughter born to Thomas J. and Virginia L. Cecil. She graduated High School in Karachi, Pakistan at Karachi American School where she developed a love for Drama and eagerly participated in school productions. After High School she worked in the American Embassy in Islamabad Pakistan and eventually moved to Lancaster, California where she attend Antelope Valley College. While attending college Diane stayed involved in the Drama Department with Acting, Set Design, Costume Design and Stage Management. After college, Diane entered the social services field and worked as a Group Home Manager for a residential boy's home in Los Angeles, California. She demonstrated a natural ability to provide gentle direction for children coming from unfortunate circumstances. Diane married Robert Joseph Kaus on April 20, 1985 and they resided in Visalia, California. Shortly after she was married, she accepted a position with Central Valley Regional Center (CVRC), a nonprofit organization dedicated to helping individuals with developmental disabilities and at risk children. Diane had a passion for serving individuals with intellectual disabilities and she was greatly involved in developing homes and programs for people who resided in the State Developmental Centers. While working full-time Diane returned to further her education at California State University Fresno and graduated with a Master's Degree in Social Work in 1994. She was eventually promoted to Assistant Director of Case Management at CVRC and retired in January 2019. In retirement, Diane's step-daughter Tami, worked as a Local Coordinator for an International Exchange Student Program and encouraged both Diane and Bob to host one of the students coming from Pakistan. Although initially reluctant, they agreed and Diane often spoke to family and friends of the unexpected rewards of cultural exchange. They gained a host-daughter, Kashaf Mujeeb, and developed a lasting relationship with her. Diane was proceeded in death by her brother, Alan Bruce Cecil, her father, Colonel Thomas J. Cecil, her sister, Teresa Lynn Cecil, and her mother, Virginia Lea Cecil. She is survived by her loving husband, Robert Joseph Kaus, daughter-by-marriage, Tami Terrazas and her husband, James, granddaughters, Cassidy and Emily Terrazas, sister, Anita Cecil, nieces, Caren Harrison and Rebecca Taylor and nephew Anthony Taylor, and friends that loved her like family, too numerous to mention. A Visitation is to be held 9-11am Tuesday, September 21, 2021 at Salser & Dillard Funeral Chapel, 127 E. Caldwell Ave., Visalia, CA 93277 with a Graveside service to follow 12pm at Visalia District Cemetery, 1300 W. Goshen Ave., Visalia, CA 93291. In lieu of flowers, donations in the name of Virginia Diane Kaus can be made to: Central Valley Regional Center Client Help Fund � 4615 N. Marty Ave., Fresno, CA 93722. Services have been entrusted to Salser & Dillard Funeral Chapel. Memorial Tributes and condolences may be offered by logging onto www.salseranddillard.com.

Virginia Diane Kaus (72) of Visalia California passed away at Kaweah Delta Medical Center on September 10, 2021. She was born on November 26, 1948 at Wright Patterson Air Force Base in Fairborn Ohio and was the first daughter born to Thomas... View Obituary & Service Information

The family of Virginia Diane Kaus created this Life Tributes page to make it easy to share your memories.

Virginia Diane Kaus (72) of Visalia California passed away at...

Send flowers to the Kaus family.