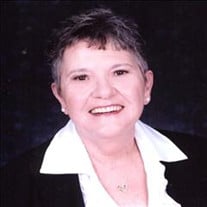 Virginia Clare Dean August 20, 1945 - February 6, 2022 Virginia (Ginny) Dean of Visalia, CA passed in the early hours of February 6, 2022 after an extended illness. She was preceded in death by her parents, Samuel and Carmela Butler (Martellotti), and siblings, Joseph Butler of Sedona, AZ and Elizabeth Stevens (Butler) of Berkeley, CA. She was born in Herkimer, NY and enjoyed an early childhood filled with many cousins in a close-knit Italian family before her parents moved the family to California. Ginny had friends across the country (even before Facebook) due to multiple moves over the years. She was the mother of four children, all born within a five-year span, which kept her solidly on her toes through the 70s and 80s. She was an active member of St. Christopher's Church in Parsippany, NJ and there were few events that took place she didn't play a hand in, including running weekly BINGO for many years. As her children grew, she returned to the workforce utilizing her accounting and bookkeeping skills at numerous positions including the Afton Restaurant in Florham Park, NJ and eventually worked as Bursar at Farleigh-Dickinson University in Madison, NJ. New opportunities took the family to Atlanta, GA in 1991 where Ginny took the leap into the world of Real Estate and learned her trade at Jenny Pruitt and Associates. Ginny spent a few years in Scottsdale, AZ before making her final move to Visalia, CA. There she spent 15 happy years with her partner, Jim Scharton. They enjoyed taking road trips to the coast, watching NASCAR and baseball, her favorite team being the SF Gigantes as she called them. Ginny continued in real estate with Keller Williams and often worked as an assistant to other realtors, helping them stay (or get) organized. Anyone who knew her would know the following to be true. First, she loved nothing more than being around others and feeling part of a family (blood or chosen). Her love language was food and lots of it. She loved to cook and would have happily fed the world if it were possible. She was also a self-described lifelong learner. With more books and subscriptions than she could possibly ever read, her family would often joke about just how well read she was. She was connected to so many that she met along the way, either in person or virtually through Facebook. To her, the platform became her way of creating a new, non-traditional family that brought her so much joy and support. She is survived by her loving partner, Jim Scharton of Visalia, CA; her four children: Michael Dean (Angie) of Atlanta, GA; Tim Dean (Amy) of Minneapolis, MN; Scott Dean of Parsippany, NJ; and Megan Dean Osorio of Raleigh, NC; as well as nine grandchildren: Billy, Kelli, Ellery, Theo, Brielle, Tyler, Angel, Gabriella and Mariana. She was loved by so many. We hope you're dancing with the angels and reunited with loved ones who have gone before. In Lieu of Flowers, Please Support Local Educational Programs to install a love of Reading. Donorschoose.org Services have been entrusted to Salser & Dillard Funeral Chapel. Memorial Tributes and condolences may be offered by logging onto www.salseranddillard.com.

Virginia Clare Dean August 20, 1945 - February 6, 2022 Virginia (Ginny) Dean of Visalia, CA passed in the early hours of February 6, 2022 after an extended illness. She was preceded in death by her parents, Samuel and Carmela Butler (Martellotti),... View Obituary & Service Information

The family of Virginia Clare Dean created this Life Tributes page to make it easy to share your memories.

Customized sympathy cards. Mailed for you.