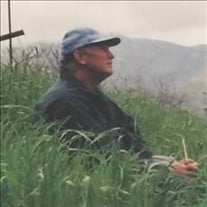 Virgil Don Holland Sr died on June 19th 2021 in Visalia CA in the company of his beloved family. He was born January 13, 1939 in Waldron, Arkansas to parents Virgil & Pauline Holland. The family moved to California and Don started first grade at Riverview Elementary School in Reedley. Don loved wide open spaces and his childhood offered many opportunities for adventures like swimming in the canals and the Kings River, "catching fish" with gunpowder tinkering with model airplanes and Go Karts teasing and getting chased by his sister's rooster. Flying became a passion for Don and and he soloed in a Piper Cub out of Shafter Airport when he was 19 years old. He maintained his pilot's license and enjoyed flying his own plane for many years. In later years, he volunteered with the Civil Air Patrol, Camarillo Division. Don graduated from Delano High School in 1957 and went on to earn a degree in business from the University of Southern California in 1961. While attending USC, he was a member of Pi Kappa Alpha fraternity and made many lifelong friends. Uncle Sam called him for duty in the U S Army shortly after his college graduation and he quickly became familiar with winters in Germany. He served his tour of duty with the 24th Engineer Battalion 4th Armored Division. as a Chaplain's Assistant and often reminded us of what a good job it was. When his battalion was out in the field for training maneuvers, Don got to sleep in a tent as opposed to being out in the elements with fellow soldiers. After being honorably discharged, Don returned home and started a 40 year career with State Farm Insurance in Reseda . He eventually bought an office building and moved his business to Agoura Hills. Upon his retirement, he and Suzi relocated from Southern California to Visalia, so he could be nearer his parents. Caring for his Mom & Dad was something that he especially liked to do and he was as thrilled to spend more time with them as they were to have him close by. He was a caring husband and father, loving son, trusted big brother and a fun uncle. He will be greatly missed by his wife Susan(Suzi), son Don Jr and daughter Jennifer; grandchildren, AJ & Julia Holland; bonus grandchildren Jake Burwick , Desiree Burwick, Marc, Justin and Alex Sego. He is also survived by his brother Paul Holland, sister Mary Thonesen and many nephews & nieces , cousins and friends.

The family of Virgil Don Holland created this Life Tributes page to make it easy to share your memories.

Send flowers to the Holland family.