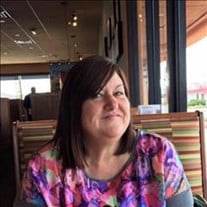 Vicky Lynn McMillan (Graham) passed away surrounded by her family on May 5, 2022 in Porterville, CA after a long battle with breast cancer, she was 61. Vicky was born to Judith Darlene and Robert Graham on May 13, 1960, in Monterey, California. Vicky was raised in Woodlake, California by Judith and Dale Atkinson along with her (3) brothers, Kevin, Mike and Kenny. A lot of her early years were spent with her brothers and her friends riding dirt bikes and being outdoors, she was living proof there was no place to far on a bicycle in Woodlake, California. Vicky attended Woodlake Schools, graduating from Woodlake High School in 1979, she was a part of the Woodlake Choir while in school. Vicky attended the College of the Sequoias studying Administration of Justice, she had an interest in the judicial system and rehabilitation of young people. In her younger years, Vicky worked at Carl's Jr in Visalia, before she went to work as a Clerical Assistant for the Respiratory Department at Exeter Memorial Hospital. She worked the Fotomat Booth in Woodlake in the parking lot of Nickel's Payless during the 80's. She worked at her family's restaurant, DJ's Drive-In. Vicky met Chuck McMillan and they married on September 18, 1981; she began her life long career as she referred to as a "Domestic Goddess". She and Chuck had (3) children Clarissa (Rissa), Jeremy, and Matthew. Vicky was heavily involved in her children's lives from transporting them to sporting events, practices, or making meals for them and their friends. She made sure they were engaged, safe and always be respectful. Vicky was involved in the Police Explorer Program in both Woodlake and Porterville for over 15 years, some of the people protecting us today, came from the ranks of that program. She was involved in the work details at the AT&T Pro-Am Golf Tournament, U.S. Open Golf Tournament, and the Pebble Beach Concours D' Elegance for several years. Vicky was preceded in death by Robert Graham, brother Kenny Atkinson, and father Dale Atkinson. She is survived by her Mother Judy Atkinson, Husband of 40 years, Chuck McMillan, Daughter Clarissa (Mike), Sons Jeremy (Samantha) and Matthew (Sylvia). Brothers Kevin Atkinson (Maribell) and Mike Graham. Vicky had 6 grandchildren, Kameron McMillan, Kitana Ramirez, Azlyn McMillan, Ryleigh McMillan, Reagan McMillan and Olivia Shoffner Services have been entrusted to Salser & Dillard Funeral Chapel. Memorial Tributes and condolences may be offered by logging onto www.salseranddillard.com.

Vicky Lynn McMillan (Graham) passed away surrounded by her family on May 5, 2022 in Porterville, CA after a long battle with breast cancer, she was 61. Vicky was born to Judith Darlene and Robert Graham on May 13, 1960, in Monterey, California. Vicky... View Obituary & Service Information

The family of Vicky Lynn McMillan created this Life Tributes page to make it easy to share your memories.

Vicky Lynn McMillan (Graham) passed away surrounded by her family...

Send flowers to the McMillan family.