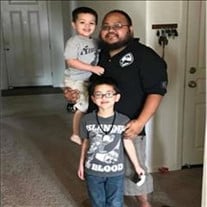 On April 14, Troy lost his battle with a long-time illness. Troy was born and raised on the beautiful island of Guam. He grew up in the village of Talofofo. Troy spent his days fishing and hunting, and his nights playing guitar and singing with... View Obituary & Service Information

The family of Troymichael Pangelinan Taijeron created this Life Tributes page to make it easy to share your memories.

On April 14, Troy lost his battle with a long-time illness. Troy...

Send flowers to the Taijeron family.