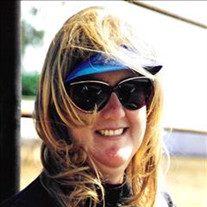 On the seventh day of the week, on November 7, 2021 at 7 p.m., Tracey Lea Baker Barton completed her life on earth and journeyed to heaven. She was 63. The number "seven" symbolizes completion and perfection, and it was only prophetic that she left the earth with so many sevens at play. Born on September 14, 1958 in Hanford, Calif., Tracey was the oldest child of Donald Lee Baker and Rebalea Baker. The Bakers lived in Visalia, Calif. during Tracey's early years, where she first met her husband Tom in kindergarten on the playground at Elbow Creek Elementary School. Her family then moved to Firebaugh for several years before moving back to Visalia when Tracey was in high school. She attended Redwood High School, where she was a letterette and never lost her ability to twirl a baton. Tracey married Tom in 1978 at the age of 19, and the pair built the home they raised their family in on the outskirts of town. For 43 years, she was a farmer's wife and a mother to four farm kids. Tracey poured her heart and soul into her children, making sure they were well-rounded, responsible and smart. She was active in their schools, hauled them to dance classes, riding lessons, horse shows, rodeos, rodeo queen contests, water polo games, play rehearsals and performances, and Special Olympic meets. She never missed a major event in their lives. She dedicated her life to Christ, and traveled throughout the world to share her love for Jesus and grow in His word, including Switzerland, Spain, Korea, the Philippines, Mexico, and each mission in California. She was a mentor to many, and the Barton home was always open to those who needed a place to heal. Tracey spent decades working as the bookkeeper for Richard "Dick" Tousseau. She also worked for Court Appointed Special Advocates (CASA) in Visalia, and eventually owned and operated her professional tax preparation business, Barton Tax Service out of Exeter, Calif. In her spare time, she loved to shop, decorate her home, and spend time with her family and friends. She was well-known for her bluntness, her laughter, and her generosity. Tracey was preceded in death by her son, Travis Barton; her mother, Rebalea Baker; her father, Donald Baker; and her mother-in-law, Lavonne Barton. She is survived by her husband and best friend, Tom Barton of Visalia, California.; daughter, Trilby Barton of Visalia, California.; daughter, Telsey Friesen (Caleb) of Victoria, British Columbia; daughter, Tannis Barton of Visalia, California son, Trevor Barton (Haylee) of Visalia, California.; grandchildren, Elijah, Joel, Monroe and Noah Friesen, and Easton Barton; father-in-law, Chuck Barton of Visalia, California.; and brother, Bill Baker (MiJung). At Tracey's request, services will be private. In lieu of flowers, please make a donation to your favorite charity in the name of Tracey Barton. Services have been entrusted to Salser & Dillard Funeral Chapel. Memorial Tributes and condolences may be offered by logging onto www.salseranddillard.com.

On the seventh day of the week, on November 7, 2021 at 7 p.m., Tracey Lea Baker Barton completed her life on earth and journeyed to heaven. She was 63. The number "seven" symbolizes completion and perfection, and it was only prophetic that... View Obituary & Service Information

The family of Tracey Lea Barton created this Life Tributes page to make it easy to share your memories.

Send flowers to the Barton family.