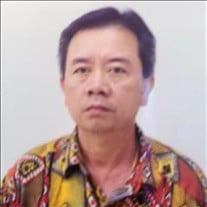 Tom Souksavath, age 72, passed away on Saturday, March 13th, 2021 after a very vigilant fight with Covid-19 at Kaweah Delta Hospital in Visalia, CA. He was born January 10th, 1949 in Luang Prabang, Laos to Kham La Souksavath and Boukai. He served as an alley for the Americans during the Vietnam War, after that he migrated to the United States on April 15th, 1981 with his then wife and three sons. They settled in Philadelphia and he entered the workforce immediately doing whatever he can. After a year they moved to NY and in 1988 he moved to Visalia where in 1991 he met his wife Farm Saechao. He moved Farm and her five children to Alaska in 1993. Tom and his wife moved back to Visalia in 2005. He was a man of many talents and worked as a shuttle driver, mechanic, barber, and as a seismic operator. Tom Souksavath lived a life full of love and laughter. He enjoyed singing, sight-seeing, and entertaining friends. His hobbies included building model planes, automobiles, and boats. He had the ability to touch people's hearts through his nature to make them laugh and was well known in the community. He is survived by wife Farm Kouie Saechao, sons: Manop Souksavath, Santi Soukdavath, Ahdoun Souksavath, Kham La Souksavath, Ton Saechao and Cheng Saechao; daughters from second marriage Low Saechao and Mouang Saechao. Family and friends are invited to the services at Salser & Dillard Funeral Chapel at 127 E Caldwell Ave on April 2nd, 2021 from 10AM to 11AM and burial from 12PM to 1PM at the Visalia Public Cemetery, to reminisce, grieve, celebrate, and honor his life. Services have been entrusted to Salser & Dillard Funeral Chapel. Memorial Tributes and condolences may be offered by logging onto www.salseranddillard.com.

The family of Tom Souksavath created this Life Tributes page to make it easy to share your memories.

Send flowers to the Souksavath family.