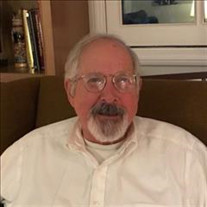 Thomas Simonian, of Visalia, California passed away on Sunday, October 31, 2021 at Kaweah Delta District Hospital. He was born on March 8, 1947, the first son of Sarkis and Rose Simonian. Thomas became a lawyer in 1972 and practiced law - first as a Public Defender, then in private practice with Joe Kalashian and Dennis Strong, next he managed the Visalia office of Borton, Petrini & Conron for a dozen years, finally opening his Arbitration & Mediation practice approximately 20 years ago at 1100 W. Center St. Visalia. He was an avid hiker and backpacker, sports fan, voracious reader, and traveler all of his adult life. As a young man he played basketball and baseball on the city teams through recreation park. Tom played singles and doubles tennis with his wife Cynthia at the local racquet club and together they spent some part of each weekend gardening. Tom cherished spending time with family members, friends, and colleagues. He was close to a group of special friends that gathered for lunch whenever one celebrated a birthday. Thomas leaves behind his wife of 49 years, Cynthia Fischer Simonian, their son Zachary Stuart, daughter in law, Santi, daughters Robin Rose and Sophie Crisp, son in law Michael, and four grandchildren: Aliya, Amelie, Jackson, and Harrison. A funeral service for Thomas will be held on Friday, November 5, at 9 am at Salser & Dillard Funeral Chapel in Visalia. Following this, graveside services will be held at the Visalia Cemetery at 10:30 am. At noon, a meal of consolation will be held at the Vintage Press Restaurant on Willis & Center Streets in Visalia. Cynthia, together with Tom, have been actively working to build a Holocaust Memorial out of buttons to honor 6 million views who perished in the shoah. In lieu of flowers, please consider a gift to the California Holocaust Education Center. Construction begins mid-January of 2022. Yehi Zichro Baroch - may his name be remembered for a blessing. Services have been entrusted to Salser & Dillard Funeral Chapel. Memorial Tributes and condolences may be offered by logging onto www.salseranddillard.com.

Thomas Simonian, of Visalia, California passed away on Sunday, October 31, 2021 at Kaweah Delta District Hospital. He was born on March 8, 1947, the first son of Sarkis and Rose Simonian. Thomas became a lawyer in 1972 and practiced law -... View Obituary & Service Information

The family of Thomas Armen Simonian created this Life Tributes page to make it easy to share your memories.

Thomas Simonian, of Visalia, California passed away on Sunday,...

Send flowers to the Simonian family.