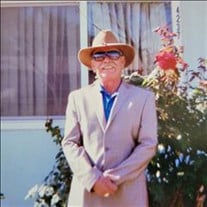 Thomas Carl Jackson passed away peacefully surrounded by family and friends on May 2, 2022. He was born to Jewell Dean Jackson and Wilber (WM) Jackson on July 21, 1950. He was the oldest of three children. Born in Bakersfield, Tom was raised in Riverdale where he attended Riverdale High School. While in high school, Tom lettered in both football and track. After graduating, Tom attended West Hills College for a short time until he answered his nation's call in 1970 to serve in the Army during the Vietnam War. From 1970 to 1972 Tom was assigned to the 48th and 43rd Scout Dog Platoons, 1st Brigade, 5th Infantry Division (Red Devils). During his time with the 43rd, Tom and his working dog would walk "point" to help patrolling platoons detect enemy presence, mines, trip wires and booby traps. Tom was paired with two very special dogs, Chris and Edsel, during his time in Vietnam. He would say that those dogs "saved his life more times than he probably even knows". In 1972 Tom was released from active duty and awarded the National Defense Service Medal, Vietnam Service Medal, M-16 Marksmanship Medal, Republic of Vietnam Campaign Medal and the Bronze Star. Tom settled down in Visalia, California where he is survived by his wife Elaine Lu Jackson. He also leaves behind his two sisters Andrea and Ron Orndorff of Princeton, MO; Amey and Tommy Dill of Cookson, OK; 6 children Michael and Chere Jackson of Wichita, KS; Brandon and Stephanie Jackson of Edmond, OK; Heather and Todd Stivers of Battle Ground, WA; Heidi and David Archer of Visalia, CA; Sara Chapman of Arroyo Grande, CA; Tim and Desiree Arnold of Visalia, CA; 20 grandchildren and 5 great grandchildren and several nieces and nephews. A Memorial Service will be held on Monday, May 9, 2022 at 2:00 p.m. at Salser & Dillard Funeral Chapel; 127 E. Caldwell Ave, Visalia, CA 93277 559-635-1144 The family has requested in lieu of flowers that donations be made in his memory to Warrior Dog Foundation at www.warriordogfoundation.org Services have been entrusted to Salser & Dillard Funeral Chapel. Memorial Tributes and condolences may be offered by logging onto www.salseranddillard.com.

Thomas Carl Jackson passed away peacefully surrounded by family and friends on May 2, 2022. He was born to Jewell Dean Jackson and Wilber (WM) Jackson on July 21, 1950. He was the oldest of three children. Born in Bakersfield, Tom was raised... View Obituary & Service Information

The family of Thomas Carl Jackson created this Life Tributes page to make it easy to share your memories.

Send flowers to the Jackson family.