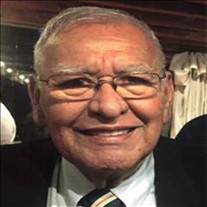 Theodore Varela, was 89 years old when he was called home to be with our Lord on January 30, 2022 in Visalia, California. Theodore was born to Felix Varela and Nestora Barbosa on December 20, 1932 in Long Beach, Ca. Glendale, Arizona was his... View Obituary & Service Information

The family of Theodore Varela created this Life Tributes page to make it easy to share your memories.

Theodore Varela, was 89 years old when he was called home to...

Send flowers to the Varela family.