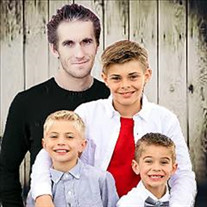 Terry Michael Ryan Jr., a beloved father, uncle, brother, son and friend passed away unexpectedly on July 10th, 2021 in Lemoore, Ca. He celebrated his 34th birthday just 2 weeks prior to his passing. Terry is survived by his 3 sons Caihdyn (11yrs), Kiyler (9yrs) and Greyson (6yrs); his siblings Thomas and Jana Logan and many cousins and extended family members. He is preceded in death by his father, Terry Michael Ryan Sr., mother Manda Ryan, maternal grandparents Earl and Bobbie Logan and his paternal grandparents Robert Ryan and Loretta Harris. Born in Hanford, Ca on June 26, 1987, Terry kept his parents on their toes with his adrenaline seeking, dare devilish personality from the time he left the womb. Terry was a lover of all things extreme and excelled at everything he tried. He adored dirt bike riding, snowboarding and skateboarding. Terry grew up on a ranch in Huron, Ca and attended Huron Elementary School where he met his friend Armando. Over time, Terry became very close to the family and was like another son to Armando's mother Amelia, who was from Mexico and just learning the English language. It was through his close relationship with Armando's family that Terry became fluent in Spanish, which, no doubt, was an invaluable asset in Terry's life. Terry was a great father, son, brother, uncle and friend. He was his mothers baby, her pride and joy. As the younger brother, he definitely fulfilled his duty of being a royal pain, but the bond between the siblings was unbreakable. Terry was the only person who could get his sister, or his "big little sis" as Terry called her, fire spitting mad only to make her laugh 2 seconds later. Numerous times, his brother Thomas, "Bub" , would " appear out of nowhere" (according to Terry) and physically pluck him from the trouble he was about to get himself in. Terry had 1 niece, Charleigh or "Charleigh Bug" as Terry called her. She would get the biggest kick from watching her uncle get her mom (Jana) all flustered and couldn't help but join them in the laughter that followed. He was the kind of friend who was loyal through thick and thin, showed respect to their families and was always willing to help no matter the time of day. One of Terrys of greatest accomplishments and the thing he was most proud of, is his 3 boys (Caihdyn, Kiyler and Greyson) that he shares with their mother Brooke. He was completely enamored by them and would often brag about how smart they were. When Caihdyn made the spelling bee he couldn't help but tell everyone and anyone that would listen . Terry and the boys loved to go on bike rides and walks together. He would often surprise them at the end of their school day by being there to walk them home, something the boys truly loved and anticipated. The boys would brag about how cool their dad was. Kiylers willingness to help others, much like his dad, was something Terry was particularly proud of. If you were to ask Greyson who his best friend was, without hesitation, he would tell you his dad. Terry was, and always will be, their superhero. Terry's passing has created a void in many lives which no one will ever be able to fill. The tears will subside slowly over time, but the void never will. Our time on earth with him came to a sudden end, but he will never be forgotten, our father, our son, our brother, my uncle, our friend. The family has been overwhelmed by the amount of love and support they have been shown by those who knew Terry. They are so grateful and cherish every memory that has been shared with them. If you have a memory of Terry that you would like to share with the family please send them an email to [email protected] . Every memory shared will forever be in their heart. A Celebration of Life will be held on Saturday August 7th at 4:00pm at Salser & David Funeral Chapel located at 127 E. Caldwell Ave. in Visalia. A reception will follow at Visalia Community Church of Christ located at 3838 South Court St. in Visalia. Dinner and refreshments will be provided. Please join us to celebrate Terry as a community of his loved ones. There will be a time to share your memories of Terry during the service. Guests are welcome and encouraged to speak.

The family of Terry Michael Ryan, Jr. created this Life Tributes page to make it easy to share your memories.

Send flowers to the Ryan family.