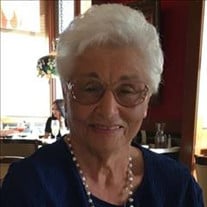 Sylvia Sousamian was born on November 20, 1934, to Hagop and Varsenig Sousamian in Goshen, California. She was born with the name, Sara, but her mother's sisters, Esther, and Margaret, renamed her Sylvia which they preferred. Sylvia was the eldest child to her siblings, Marilyn, and Michael. When she was young, the family moved to a farm just north of Visalia. It was there on the farm that a young farmer named, Sark, would visit wanting to buy milk. Sark and Sylvia began courting and soon decided to get married. They were married on November 13, 1954, at St. Mary Armenian church in Yettem. Following their marriage, the couple was blessed with 3 sons, Bryan, Richard, and David. Sark and Sylvia worked very hard owning and operating their walnut business, Yahnian Farms. Sylvia was in charge of the books, the walnut sorter, and the scale house. While Sark ran the huller and Bryan harvested the walnuts. Sylvia had a business with her parents as well. Together they picked, canned, and sold grape leaves under the label, SY Grape Leaves. When she wasn't working, Sylvia spent her time being a dedicated mother; always supporting her sons and their activities. She was also an active member of St. Mary Armenian church and remained very involved in the church organizations throughout her life. Sylvia always taught her children and grandchildren to keep the Lord and church at the center of their lives. During their retirement, Sark and Sylvia spent a lot of their time socializing with their friends, attending coffee groups, and going out to dinner. But most of their effort was spending as much time with their children and grandchildren as they could. On Monday, December 27th, Sylvia passed away peacefully. She was preceded in death by her parents, Hagop and Varsenig Sousamian, and her brother, Michael Sousamian. She was also preceded in death by her son, Bryan Yahnian, and her husband of 66 years, Sarkis Yahnian. Sylvia is survived by her sister, Marilyn Zerounian, her sons, Richard and David Yahnian, and daughters-in-law, Renee, and Jennifer Yahnian. She is also survived by her 10 grandchildren and 5 great-grandchildren and many nieces and nephews. Sylivia will truly be missed by all who loved her. Funeral services will be held 10am Thursday, January 13th, 2022 at St. Mary Armenian Apostolic Church, 14395 Ave. 384, Yettem; with burial to follow 12pm at Visalia District Cemetery, 1300 W Goshen Ave, Visalia. Services have been entrusted to Salser & Dillard Funeral Chapel. Memorial Tributes and condolences may be offered by logging onto www.salseranddillard.com.

Sylvia Sousamian was born on November 20, 1934, to Hagop and Varsenig Sousamian in Goshen, California. She was born with the name, Sara, but her mother's sisters, Esther, and Margaret, renamed her Sylvia which they preferred. Sylvia was the... View Obituary & Service Information

The family of Sylvia Yahnian created this Life Tributes page to make it easy to share your memories.

Send flowers to the Yahnian family.