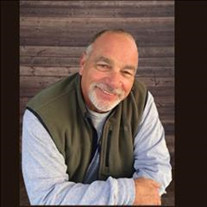 STEVEN WAYNE NELSON Steve Nelson, age 71, passed away peacefully April 17, 2021, following a valiant fight with pancreatic cancer. He was born in Exeter, California, on January 24, 1950 to Wayne Nelson and Dorothy Nelson. Steve was preceded in death by his parents, his brother, Mike Nelson and his sister, Georgine Stevens. Steve is survived by his wife of 46 years, Sheila Nelson, daughters, Rachelle Chapman, and her husband, Russell Chapman, Shannon Nelson and his "fur baby" named Romeo. He is also survived by his two grandchildren, Katherine Chapman and Connor Chapman. In addition, he is survived by his sisters, Lavonne Ramsey (Richard), Cheryl Ehnisz, Debbie Nelson, Jennifer White and DeeDee Sebert (Shawn). When Steve was a small boy, his family moved to Tulare, California. He attended Roosevelt Elementary School and Mulcahy Junior High School before graduating from Tulare Western High School in 1968. In 1970, he was drafted to the United States Army and served his country during the Vietnam War. Shortly after his return from Vietnam, Steve fell in love with Sheila Baker. Before formally meeting Sheila for the first time, he proclaimed to a friend, "I'm going to marry that girl!" Sure enough, Steve and Sheila married in 1974 and made their home in Tulare. They remained devoted and inseparable throughout their 46-year marriage, adding two daughters, Rachelle and Shannon. Steve worked in the construction industry for 50 years. He ran his own remodeling business, then worked for the Tulare City School District until his retirement in 2012. Steve's finishing work was superior and very specialized. He had the uncanny ability to build, create or repair almost anything and often donated his time and talents to others without charge. Upon retirement, Steve and Sheila embarked on an extended "road trip" in their travel trailer, achieving Steve's goal of visiting all 50 U.S. states. A natural history and geography buff, Steve's trips indulged his love of exploring new places. Steve loved music and dancing. He anchored his values in a strong faith and cherished spending time with family and friends. He possessed a unique knack for making every person he met feel special. He is greatly missed. A Celebration of Life will be held Monday, May 3 at Evergreen Island, 2567 E Bardsley Ave in Tulare at 10:30 AM. Donations may be made in Steve's honor to the Vietnam Veteran Memorial Fund: https://www.vvmf.org/give-to-vvmf/ https://eur02.safelinks.protection.outlook.com/?url=https://www.vvmf.org/give-to-vvmf/&data=04|01|[email protected]|7f2ccffcfa47410c06d808d908d27acc|f30ac191b8b445f29a9be5466cb90c2f|0|0|637550522366588763|Unknown|TWFpbGZsb3d8eyJWIjoiMC4wLjAwMDAiLCJQIjoiV2luMzIiLCJBTiI6Ik1haWwiLCJXVCI6Mn0=|1000&sdata=6ePIqQQ8jkhGllyUEvVed8DKbPjD9LAlNa5N+LWtZXs=&reserved=0>

The family of Steven Wayne Nelson created this Life Tributes page to make it easy to share your memories.

Send flowers to the Nelson family.