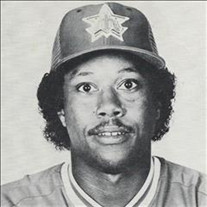 Stephen Lewis Stroughter, 65, of Visalia, California, passed away March 6, 2018 in Fresno, California. He was born on March 15, 1952 to Lewis and Mildred Stroughter. He spent his childhood on the north side of Visalia. As a child Stephen fell in love with the game of baseball and he played on the champion little league teams. He graduated from Redwood High School in 1970. He excelled in baseball, football and basketball, He was the first African-American student body president at Redwood High School. In 1971, Stephen was drafted by the San Francisco Giants. He ended his career in 1982 with the Seattle Mariners. Stephen then played most of a full season in Japan with the Hashin Tigers in 1983. His love of baseball continued as he coached high school baseball as well as giving private hitting lessons when he returned to Visalia, During his baseball career he was known as the Wonder Man and was said to have had a beautiful left hand swing, Stephen loved all kinds of music but his favorite was Earth, Wind and Fire. Stephen is survived by his wife Isabelle, his son Michael (Ruby) Helsley of Fresno, Ca. His sister Sandra King of Fresno, Ca. stepdaughters DeeAnna (Gerald) Hurd of San Leandro, Ca. Tiffany Hamilton of Tulare, Ca. Anneka Hamilton of Modesto, Ca. Three granddaughters, 2 step granddaughters, a step grandson and 2 step great-granddaughters. Stephen also leaves to cherish his memory a host of family and friends, He was proceeded in death by his parents Lewis and Mildred Stroughter and his brother Jimmy West. A memorial service will be held in his honor on April 21, 2018 at Salser & Dillard Funeral Chapel. Condolences may be offered by logging onto www.salseranddillard.com One You've got one life You've got one glove You've got one game You've got one love You've got one chance You're just one man So play the game as hard as you can

Stephen Lewis Stroughter, 65, of Visalia, California, passed away March 6, 2018 in Fresno, California. He was born on March 15, 1952 to Lewis and Mildred Stroughter. He spent his childhood on the north side of Visalia. As a child Stephen fell... View Obituary & Service Information

The family of Stephen Lewis Stroughter created this Life Tributes page to make it easy to share your memories.

Send flowers to the Stroughter family.