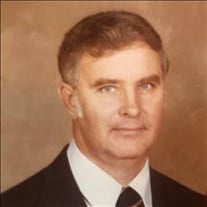 Stephen Francis Lahmann Jr., 86 of Three Rivers, California, passed away peacefully at home with family by his side after a long illness of Parkinson's & Lung disease. Stephen was born to Stephen Francis Lahmann Sr. and Virginia Jolliffe on November 24, 1934 in San Francisco, California. He graduated from American High School in Naples, Italy and was able to travel the world as part of his father's Navy Officer assignments. Stephen later served in US Army as a paratrooper. He graduated CSU Fresno and earned a master's degree in biology from Purdue University. Stephen retired after 37 years with Visalia Unified School District; starting as a Biology teacher, then counselor, and then Dean for most of his career. He also served as Principal of Mt. Whitney Summer School for many years. Early in his teaching career he coached wrestling and served as Athletic Director as well as Student Activities Advisor. Later, he also enjoyed a second career as an Anatomy, Physiology, and Microbiology Instructor at West Hills College. Upon retirement, Stephen moved to Three Rivers and restored, along with wife Barbara, her grandparent's adobe home "Livingston Adobe". He was a member of St. Clair's Catholic Church, Three Rivers Lions Club, and served on the Three Rivers Volunteer Patrol. He shared a love of backpacking, skiing, and camping with his family and friends. Stephen was preceded in death by his daughter Sara Lahmann. He is survived by his wife of 50 years, Barbara Lahmann; son, Michael Lahmann, and daughter, Katy Lahmann Harris. He is also survived by his three grandsons; Ian Harris, Kevin Harris, and Blake Harris. A viewing will be held 930am Thursday, June 10, 2021 at Santa Teresita Youth Conference, 43816 Sierra Dr, Three Rivers, with a Mass of Christian Burial to be celebrated at 10am, followed by an 1130am committal service at Three Rivers Public Cemetery, 41841 Sierra Dr, Three Rivers. In lieu of flowers, donations in honor of Stephen may be made to St. Anthony's Retreat Center. Services have been entrusted to Salser & Dillard Funeral Chapel. Memorial Tributes and condolences may be offered by logging onto www.salseranddillard.com.

The family of Stephen Francis Lahmann, Jr created this Life Tributes page to make it easy to share your memories.

Send flowers to the Lahmann family.