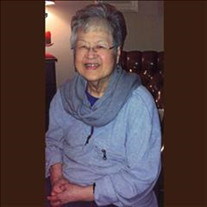 Susie passed away peacefully on February 22, 2021 with her loving family by her side. She was 86. Susie was born on August 8, 1934 in Ivanhoe, CA to Shinichi and Sawano Yamashita. In August 1942, her family was relocated to a World War II internment camp in Poston, AZ where she enjoyed listening to her Dad play the Harmonica. He then taught her to play and that became a lifelong enjoyment, she then played throughout her life at family gatherings. She graduated from Visalia Senior High School in 1952 and College of the Sequoias in 1954. She was a lifetime member of the Visalia Buddhist Church. Her love of Japanese dance at the "Obon" Festival was her summer fun for over 30 years. She traveled to learn new dances each year and came back, taught the dance and also enjoyed helping the dancers get dressed in their "Kimonos." Her first local Festival was in 1984. She never missed an Obon Festival until very recently. She also enjoyed playing the "Taiko" drums. As much as she loved dancing, her family loved watching her more. It was everyone's favorite summer pastime. Her smile and grace came from immense pride of her Japanese Heritage. She retired from Stanley Bostitch in 1998 after working there 30 years. Her retirement years were filled with taking care of her twin Grandsons, Brandon and Michael, collecting coins, Precious Moments, Beanie Babies and Trading cards. She enjoyed traveling with her sisters throughout the United States, Mexico and Canada. She traveled to many professional sporting events to watch the LA Rams, LA Dodgers and LA Lakers. If there was a game on TV, you would find her with her Son-In-Law, Wally watching together. Football season was her favorite, it meant her Grandsons and Great Grandchildren would come to watch together. She was the best cheerleader at gametime. She was also excellent at bowling with a 220+ average. She qualified for two California Women's Bowling Association (CWBA) Championship Tournaments in 1962 and 1963. She bowled in a league with her twin sisters (Judy and June) for ten years, from 1959 to 1969. She had such a special one of a kind bond with her daughter - they were inseparable. Wherever Susie was, Susan was always close by. She passed her love of daily journaling to her daughter as well. She left a lifetime of handwritten memories to be cherished by her family. Anyone who met Susie would be captured by her radiant smile, kind heart and her love of conversation. Anyone who was a friend of the family, was truly considered family and she welcomed them with open arms. She will be so deeply missed - Until We Meet Again. She is preceded in death by her Parents, Shinichi and Sawano Yamashita and Sisters, Sue Matsuda, Betty Hasebe and Nancy Yamashita. She is survived by her Daughter, Susan Terry, Son-In-Law, Wally Terry, Grandchildren, Brandon and Michael Terry, Great Grandchildren, Brody, Jaxson, Molly, Liam and (Great Granddaughter on the way, August) Siblings, June Yasuda, Judy Yamashita (2/27/21), Seiji Yamashita, Aiko Hasebe and numerous nieces and nephews. Memorial Service will be held 6:00 to 7:00 pm on Saturday, March 6, 2021 at Salser & Dillard Funeral Chapel, 127 E. Caldwell Avenue, Visalia

Susie passed away peacefully on February 22, 2021 with her loving family by her side. She was 86. Susie was born on August 8, 1934 in Ivanhoe, CA to Shinichi and Sawano Yamashita. In August 1942, her family was relocated to a World War II... View Obituary & Service Information

The family of Shizue Susie Yamashita created this Life Tributes page to make it easy to share your memories.

Susie passed away peacefully on February 22, 2021 with her loving...

Send flowers to the Yamashita family.