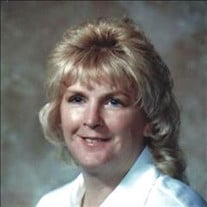 Sandra Lee Montano, age 65, a resident of Visalia, California, passed away on Tuesday, November 2, 2021. Sandy was born to Bill and Ann Hendrix on February 5, 1956 in Modesto, California. The family later moved to Visalia, California and Sandy graduated from Mt. Whitney High School in 1974. Sandy met Raymond Montano Jr. at Haagen-Dazs in Tulare and they married in 1992, making their home in Visalia, where they raised their combined family of four children, Melissa, Brian, Tina, and Raymond. Sandy was very active in softball for many years and it later became an activity that she shared and participated in alongside her children. Sandy always offered support or anything else that was needed to both family and friends. She always put the needs of both family and friends above her own. Sandy was a wonderful wife, mother, grandmother, sister, and friend and will be greatly missed by all who knew her. Sandy was preceded in death by her father Bill Hendrix, mother Ann Hendrix, and brother Kenny Hendrix. She is survived by her husband Raymond Montano Jr., daughter Melissa Gallagher (Richard), son Brian Slover (Aubrey), stepchildren Tina Gonzales (Eric) and Raymond Montano III, sisters Audrey Childress (Ted), Gina Eidson (Randy), Marie Bradley (Dave), grandsons Austin Gallagher and Eric Gonzales, granddaughters Bailey Slover, Brooklyn Slover, and Sami Gonzales and one great-grandson, Jayden Gonzales. Memorial services will be December 11, 2021 at 11 AM, at Salser & Dillard Funeral Chapel, 127 E. Caldwell Avenue, Visalia, California. Services have been entrusted to Salser & Dillard Funeral Chapel. Memorial Tributes and condolences may be offered by logging onto www.salseranddillard.com.

Sandra Lee Montano, age 65, a resident of Visalia, California, passed away on Tuesday, November 2, 2021. Sandy was born to Bill and Ann Hendrix on February 5, 1956 in Modesto, California. The family later moved to Visalia, California and Sandy... View Obituary & Service Information

The family of Sandra Lee Montano created this Life Tributes page to make it easy to share your memories.

Send flowers to the Montano family.