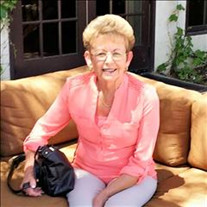 Sandra Lee Hale October 15, 1946 - December 27, 2021 Sandra "Sandy" Lee Hale went to be with Lord on December 27, 2021. Sandy's wish was to be home for Christmas. She was granted that wish and was welcomed home by an adoring family and was blessed to spend a few days with loved ones celebrating, in her traditional way, the birth of Jesus. Her children, sisters and spouses, grandchildren and a multitude of nieces and nephews were able to see, talk and be with her in those last days. Sandy was born in Bakersfield on October 15, 1946, to Jackie and Wayne Wallace. At the age of 4 she moved into her new home in Oildale California. Soon after in 1953, she was joined by sister Dana Lynn and later in 1958 Terri Kay rounded out the family. She attended North High School, marrying soon after graduation. Little did Sandy know that she would marry the boy three houses down. To hear Sandy's Mom, Jackie, tell the story, she picked Chris out and with the help of Chris's Mom, Audrey, and they set up their first date, Chris's Prom. That led to more dates and 56 years of marriage. Sandy and Chris were married on February 13, 1965, and, when Scott was born on New Years Eve of the same year, Sandy began her most cherished career as a stay-at-home Mom. Kristi followed in November, 2 years later, completing the family. For 19 years Sandy raised and nurtured her family in Bakersfield. Taking an active role in the kid's education, leading the family to Sunshine Church, and the seeming never ending projects she came up with redecorating the house. She was often found leaning off a ladder, hanging new wallpaper or painting. On November 20, 1984, Sandy, Chris, Kristi and Webster, our dog, moved kicking and screaming to Visalia, California, leaving Scott in Bakersfield to fend for himself. It didn't take long for Sandy to meet new friends and fall in love with the community, never wanting to move back. After a couple of years Scott and Kristi traded places with Scott marring Cheryl in Visalia and Kristi marring Jeff in Bakersfield. To Sandy's delight grandkids soon arrived. Lauren and Chelsea in Visalia and Chase and Jordan in Bakersfield. Sandy was again in her element. School functions, open houses, plays, sporting events, costume parties, sleepovers, birthday celebrations. The grandkids being the light of her life. Once Chris talked about retiring in Idaho and Sandy agreed, but only if he could find jobs for everyone because she was not moving away without the grandkids. We stayed in Visalia. Sandy is survived by her children Scott Hale and Kristi and Jeff Shepherd, grandchildren Lauren and Michael Manning, Chelsea Hale, Chase and Megan Shepherd and Jordan Shepherd. She also leaves behind sisters Dana and husband Eldon Ross and Terri and husband Raymond Dobbs. She also leaves behind a multitude of nieces and nephews and their families. The holiday celebrations, and each of their birthday parties bringing tremendous joy to her life. Don't just pretend to love others. Really love them. Hate what is wrong. Hold tightly to what is good. Love each other with genuine affection, and take delight in honoring each other. Romans 12:9-10 NLT There will be a Celebration of Life in Bakersfield at a later date and location. Services have been entrusted to Salser & Dillard Funeral Chapel. Memorial Tributes and condolences may be offered by logging onto www.salseranddillard.com.

Sandra Lee Hale October 15, 1946 - December 27, 2021 Sandra "Sandy" Lee Hale went to be with Lord on December 27, 2021. Sandy's wish was to be home for Christmas. She was granted that wish and was welcomed home by an adoring family and was... View Obituary & Service Information

The family of Sandra Lee Hale created this Life Tributes page to make it easy to share your memories.

Send flowers to the Hale family.