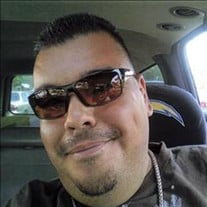 Salvador Gutierrez Jr., a wonderful, and gregarious man, friend to everyone and lifelong resident of California, died suddenly and unexpectedly on the morning of January 20th, 2022. He was born in Dinuba California on the twentieth of June in 1974. He was the youngest of five children and the only son born to Teresa and Salvador Gutierrez. He spent his early years in the San Diego area, then moved back to the Tulare County area where he resided until his passing. Salvador was made a proud father in September of 1995 with the birth of his son, Christopher Lorenzo Gutierrez. He was a dedicated and firm father. In his last years, he assumed the role of stepfather to his wife's children from another marriage; Faith, Edward, and Grace Woodard. He often challenged his wife's youngest daughter Grace to be her very best, knowing the success that lies ahead of her in her life. He was the kind of father that every woman wished for her children to be raised by, unwavering in his love. Salvador was blessed to spend the last three years of his life in a relationship with and then married to Lori Gutierrez. The two met while he was working as a bus driver for the City of Visalia. They became fast friends, and remained in contact, as good friends until a romance developed at the end of 2018. They were married February 15th, 2020, on a beautiful day in Visalia, California. Salvador would often be heard telling his wife, "Te amo con todo mi corazon," and these would be his last words as he fell asleep the night before. Salvador was a diehard Chargers fan, loyal to the area, also rooting for the Padres, and made an effort to watch every game. He loved spending time with family, at family gatherings and barbeques. He was a devoted son, calling his mother daily and checking in on her often. As a husband, Salvador was loving, committed, and steadfast. He was thoughtful and often surprised his wife Lori with gifts. He was looking forward to celebrating their anniversary in one month's time, and had planned a special trip for the occasion. He is survived by his mother, Teresa Gutierrez, his wife Lori Gutierrez, his son Christopher, his stepchildren Faith, Edward, and Grace, along with his four sisters Lupita, Maria Teresa, Domitila, and Jetzabel. He is also known to have been very close with and assisted with raising his niece, Cassandra. He is further survived by other relatives, along with his best friend Joe Guardanapo, whom he referred to as his "brother from another mother." He is preceded in death by his father, Salvador Gutierrez Sr. A celebration of life gathering will be held on February 20, 2022 from 10am to 2pm at Arbor #12, Mooney Grove Park. In lieu of flowers, please consider a donation at the following link. Please come prepared to share a memory or story. https://www.gofundme.com/f/sals-memorial-fund Services have been entrusted to Salser & Dillard Funeral Chapel. Memorial Tributes and condolences may be offered by logging onto www.salseranddillard.com.

Salvador Gutierrez Jr., a wonderful, and gregarious man, friend to everyone and lifelong resident of California, died suddenly and unexpectedly on the morning of January 20th, 2022. He was born in Dinuba California on the twentieth of June in... View Obituary & Service Information

The family of Salvador Gutierrez, Jr. created this Life Tributes page to make it easy to share your memories.

Send flowers to the Gutierrez family.