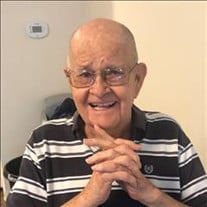 Ronny Gene Easter passed away peacefully in Visalia, California on December 8, 2021, with his beloved niece Robin Westbrook at his bedside. He was born on November 26, 1933, in Randal Kansas to Tom and Helen Easter. The family moved to California in his youth. He graduated from Tulare Union High School in 1952. He attended College Of The Sequoias until joining the United States Navy, serving from 1954 - 1958. After serving his country he continued his education at San Jose State, graduating with a Bachelor's in Physical Education and a minor in Business Education. He was a dedicated Business teacher and basketball coach for over 30 years at Tulare Western High School. Although Ronny taught at Tulare Western he remained a true Tulare Union Redskin. He could sing the Tulare Union fight song until his health declined. Ronny was a passionate person. He was a die-hard Dodgers and 49er's fan. Ronny loved bowling, golfing and traveling. He traveled and played golf at many United States and European countries in his retirement. One of his proudest achievements was a hole in one at the Tulare Golf Course. He was preceded in death by his parents, beloved sister Shirley Easter Thompson, brother in-law Benny Thompson and long time friend and companion Shirley Casey Carriger. He is survived by his children Kenny and Julie Easter both of Portland, Oregon. Grandchildren Hannah Villanueva and Micheal Easter, Tulare, 3 great grandchildren, 2 nieces Robin Westbrook (Neal) Pixley, Janet Hardy Las Vegas, nephews Steven Thompson, Orville, Keith Thompson, Wilson, NC, 5 beloved great nieces and nephews, 6 great great nieces and nephews, and surrogate niece and compassionate caretaker Trudy James, Tulare. Graveside services will be held Tuesday, December 21, 2021 at 10 am at the Tulare Cemetery on Kern Street. In lieu flowers, memorial donations may be made to American Cancer Society or Donors favorite charity

Ronny Gene Easter passed away peacefully in Visalia, California on December 8, 2021, with his beloved niece Robin Westbrook at his bedside. He was born on November 26, 1933, in Randal Kansas to Tom and Helen Easter. The family moved to California... View Obituary & Service Information

The family of Ronny Gene Easter created this Life Tributes page to make it easy to share your memories.

Send flowers to the Easter family.