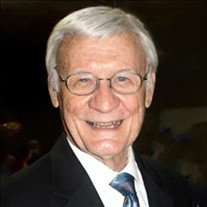 Honoring the Life and Ministry of Robert David Shipman Robert David Shipman, best known as Bob, of Visalia, California, peacefully stepped into his heavenly home on March 29, 2022, at the age of 84. He leaves behind a legacy characterized by a loving family, longtime church family and friends, and a lifetime of serving his Savior, Jesus Christ. Bob was born June 14, 1937, in Dinuba, California to Arolla and Irene Shipman. His father passed away when he was a very young child. After his mother and stepfather's untimely death in his teen years, his grandparents, William David and Birdie Light were very instrumental in caring for him and his siblings. He graduated from Mt. Whitney High School in 1956 and was active in football. Bob was a loving husband to his sweetheart, Ann Brumley Shipman; an outstanding dad to his two children and their spouses, David and Tami Shipman of Visalia and Sandy and Bert West of Divide, Colorado; and the best grandpa to his four granddaughters, Tiffani and Marissa Shipman and Megan and Lauren Ashley West, all of whom he affectionately called "Grandpa's girls." Bob dearly loved and was preceded in death by his twin sister, Barbara (Richard) Dillon and older brother, Richard (Shirley) Shipman. He married Ann Brumley on August 31, 1959. They met at age 18 when Bob managed the Visalia Fox Theater and after declaring to his buddies that he was going to marry that beautiful girl in the box office. They enjoyed 63 wonderful years together, working passionately in God's work and investing countless hours ministering to many lives who are forever impacted by their influence. They also enjoyed traveling to visit family and seeing new places together--one of the highlights was going to Israel in 2008 and seeing the biblical sites of the Holy Land. They also had fun motorcycling with friends in their younger days. Bob was a proud American, serving his country in the United States Army from 1956-59. In his last year in the Armed Forces, he was actively deployed to Korea, serving honorably in the Korean War. A well-known and respected resident of Visalia, Bob worked as a financial strategist working with Fortune 500 companies, and was also an MLM expert and an entrepreneur. He would be the first to tell you that his success in life came from serving God first. He lived faithfully as an example of that truth. As an ordained minister of the Gospel of Jesus Christ, Bob dedicated his life to building the Kingdom of God, effectively establishing Sunday School programs, bus ministries and other areas impacting lives including writing and teaching Bible studies, sermons, and books. Bob was one of the founders of Covenant of Peace, International Church (COPI) in Visalia, working side by side with his son, Pastor David Shipman. He was a firm believer in church mission work, traveling to Thailand with his son and the Philippines and Africa with his wife, Ann and good friend, Pastor Chuck Wilsey. He instilled truth, honor, integrity, excellence, and love into every life he encountered and every project he accomplished. His famous saying which he lived out faithfully to his home-going was, "We win!" A celebration of life will be held at Salser and Dillard Funeral Chapel (127 E. Caldwell Ave in Visalia) at 10 a.m. on Saturday, April 9, 2022, with military honors given. Longtime ministry friend, Pastor Kenneth Harbaum of COPI Headquarters in Eaton, Ohio will officiate. Private interment will be at Bakersfield National Veterans Cemetery. Services have been entrusted to Salser & Dillard Funeral Chapel. Memorial Tributes and condolences may be offered by logging onto www.salseranddillard.com.

Honoring the Life and Ministry of Robert David Shipman Robert David Shipman, best known as Bob, of Visalia, California, peacefully stepped into his heavenly home on March 29, 2022, at the age of 84. He leaves behind a legacy characterized by... View Obituary & Service Information

The family of Robert David Shipman created this Life Tributes page to make it easy to share your memories.

Honoring the Life and Ministry of Robert David Shipman
Robert...

Send flowers to the Shipman family.