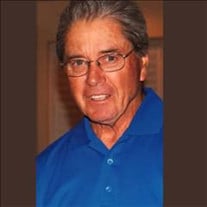 Robert "Bob" James Rogers, 86, of Visalia, CA passed away peacefully in his home on March 31st, 2022 with his loving family by his side. Bob was born on October 15th, 1935 in Oakland, CA to Mabel (Phillips) & Edwin Rogers. He grew up in San Leandro, CA where he enjoyed playing sports and was a devoted 49ers, SF Giants, & Oakland A's fan. In 1953, he graduated from San Leandro High School and at the age of 18 began his lifelong career working for Southern Pacific Railroad for over 40 years. In 1956 Bob met the love of his life, Judith "Judy" Brauer, and after only 6 weeks of dating they were engaged and married 6 months later in 1957. In 1958, Bob was drafted into the military and proudly served in the United States Army from 1958-1960. Bob was stationed in Oahu, Hawaii where he trained as a communications specialist. Bob & Judy were blessed with two children, a daughter Kori in 1965 and a son Kevin in 1967. They later moved to Visalia, CA in 1974 where Bob worked as a Signal Maintenance Supervisor out of Tulare overseeing the maintenance of all railroad crossings in Central California. Bob and Judy were happily married 46 years until her death in 2003. Bob was fortunate to find love a second time and married Wanda Hampton in 2007. Together they enjoyed spending time with their blended families, traveling, and going to concerts. Bob loved listening to all genres of music. Wanda was a devoted, loving wife to Bob and took excellent care of him, especially in his later years. In his late 40's Bob became an avid runner and was a member of the Visalia Runner's Club. Bob ran over 40 marathons in his lifetime and in one year ran the Los Angeles, San Francisco, & New York marathons receiving the Mercedes Benz award for this accomplishment. In his later years he took up the sport of golf and loved golfing at various courses throughout CA. Bob loved all sports. He was a season ticket holder for Nascar races in Fontana, CA and Fresno State Football. You could even catch him at Bay Meadows or Santa Anita race tracks betting and enjoying the horse races. Bob cherished spending time with his family. He was a devoted father & papa to his children and grandchildren. He was the type of dad who never missed a parent-teacher conference, a dance performance, or a ballgame. He was a hockey coach, a baseball coach, and a huge support to his children in all their endeavors. He always had the best life advice for his grandchildren and never missed one of their events. He had a generous heart and was a true comedian. He always showed up for the people he loved and he made sure they knew how proud of them he was. He had an extraordinary heart, always willing to help others within his community and his own personal life. Everyone looked up to Bob. Bob is survived by his loving, devoted wife of 15 years, Wanda (Hampton) Rogers; his children Kori (Rodney) Machado of Exeter, CA; his son Kevin (Michelle) Rogers of Veradale, WA; his grandchildren Paige & McCall Machado and Dakota & Chad Rogers; his brother Dale Dameral Sr. of Hayward, CA; step-daughter Teyonna James & her children Krystiana & Robert of Visalia CA; step-son Vernon Merriott (Linda) and their children Courtney, Brooke, Connor, Blake, & Brittany of Chico CA; as well as, many nieces & nephews. Bob was preceded in death by his first wife Judy, his two brothers Ed Dameral of Texas, Gary Dameral of Tennessee, his mother Mabel Emig and his step-father Kurt Emig of San Leandro, CA. Graveside services will be held 10:30 AM Friday, April 22nd, 2022 at Visalia District Cemetery, 1300 W Goshen Ave, Visalia. Services have been entrusted to Salser & Dillard Funeral Chapel. Memorial Tributes and condolences may be offered by logging onto www.salseranddillard.com.

Robert "Bob" James Rogers, 86, of Visalia, CA passed away peacefully in his home on March 31st, 2022 with his loving family by his side. Bob was born on October 15th, 1935 in Oakland, CA to Mabel (Phillips) & Edwin Rogers. He grew up in San... View Obituary & Service Information

The family of Robert James Rogers created this Life Tributes page to make it easy to share your memories.

Send flowers to the Rogers family.