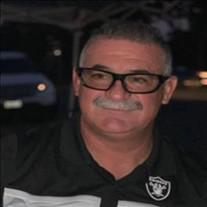 Robert Elmer Reed, also known to coworkers and friends as "Raider Reed" or "RER", 62, entered the gates of heaven on November 16th, 2021 after a battle with COVID pneumonia. Robert was born on October 12th, 1959 in Spokane Wa. to Sherry Wells & Robert Elmer Clark ll. He joined the work force at a very young age of 15 at United Market in Dinuba Ca. Robert had various jobs through out his life, which provided a comfortable life for his family! He took pride in being a Correctional Officer for the State of California, for the past 20 years. Robert enjoyed vacationing with his wife and looked forward to retirement in March. He had plans to enjoy time with his family and his puppy girl, Sophie. Robert married his soulmate and the love of his life, Virginia Enriquez on December 12, 1981. They were planing on celebrating their 40th wedding anniversary soon. Together they raised 3 children, Tiffanie, Kimberlie and Joshua. Robert is proceeded in death by his parents Sharon and Glenn Reed and Robert Elmer Clark ll. Robert is survived by his wife Virginia Reed, his children Tiffanie (Jonathan) Munro, Kimberlie Reed, Joshua Reed and his beloved puppy girl Sophie. His siblings Elizabeth Reed, James (Cheryl) Reed, Michael (Leslie) Reed & Robert (Mayana) Clark. His in-laws Helen & Isidro Enriquez and his step mom Sandy Clark. His brother in laws Isidro (Shelia) Enriquez Jr. & Ronnie (Laura Christine) Enriquez. He was also blessed with many nieces and nephews Jason, Katie, Cami, Christin, Justin, Jasmine, Luke, Madalynn, Anthony, Matthew, Joseph, Victoria, Erin, Ronnie, Summer & Nathan. Roberts Celebration of life will be held on December 2nd 2021 at Evergreen Island in Tulare Ca. Masks are requested, but not required. Services have been entrusted to Salser & Dillard Funeral Chapel. Memorial Tributes and condolences may be offered by logging onto www.salseranddillard.com.

Robert Elmer Reed, also known to coworkers and friends as "Raider Reed" or "RER", 62, entered the gates of heaven on November 16th, 2021 after a battle with COVID pneumonia. Robert was born on October 12th, 1959 in Spokane Wa. to Sherry Wells... View Obituary & Service Information

The family of Robert Elmer Reed created this Life Tributes page to make it easy to share your memories.

Send flowers to the Reed family.