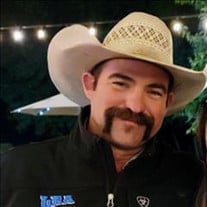 Robert Bennett Lea III, 37 of Elderwood, California passed away November 18th, 2021 in a tragic accident near Woodlake, California. Robert was born to Robert Bennett Lea JR, and Elizabeth Jean Lancaster January of 1984 in Visalia, California. Robert grew up in the foothills of Lemon Cove, and Visalia, California, He Graduated from Golden West High school in 2002, then went on to attend West Hills College. Robert was an athlete, with a special interest in Rodeo. His work ethic showed at a very early age. September of 2006 Robert married the love of his life Tami, together they made their home in Elderwood, California. They excitedly welcomed their first-born son Cash in January of 2009, then in September of 2010 daughter Saige. Robert's pride and joy and greatest legacy are his children. Robert and Tami have instilled in them the value of hard work, and love for the country life they live. The love an admiration he had for them was endless. He was the definition of Entrepreneur. He owned, built, and managed several businesses. Hard work was something he welcomed and enjoyed. Together as a family they have created a little piece of heaven at the barn, complete with a roping arena. Robert became an A.C.T.R.A producer in 2018 and with Tami by his side went on to produce many events in the arena. He would invite all the Jr Rodeo kids over for practice anytime. They worked unimaginable hours as a family to make the barn perfect, developing the Venue business. April of 2020 Robert brought back and produced the Annual 3 Rivers Lions Club Roping. He served as president of the C.J.C.A (Junior Rodeo) for the past two years, volunteering to stay on for the next 2. Under his direction the association has grown to be the largest junior rodeo association in the state of California. He made a point to get to know every contestant and their families, offering assistance and encouragement every step of the way. Robert is survived by his wife Tami, son Cash, and daughter Saige. Father: Robert Bennett Lea J.R, Mother: Elizabeth Lancaster-Frank Shoenbachler, Gary and Colene Tarbell. Grandparents: Elaine Lea, Carol and Paul Wallen, Wayne Battenfield. Brothers: Brandon Lea (wife- Rebecca), Nicholas Lea (wife-Breann), Sister Brook Hartman (Husband-Chad) along with 8 Nieces/Nephews. Robert has touched so many lives throughout our community, he will be greatly missed and he will forever be in our hearts. Keep that smile he always wore on his face in your memories. We lost a good one. Graveside services will be held 10am, December 7, 2021 at the Exeter District Cemetery, 719 E Marinette Ave, Exeter, CA. Immediately following will be a celebration of life at Cottonwood Barn 19969 Ave 376 Woodlake, CA. Services have been entrusted to Salser & Dillard Funeral Chapel. Memorial Tributes and condolences may be offered by logging on www.salseranddillard.com.

The family of Robert Bennett Lea, III created this Life Tributes page to make it easy to share your memories.

Send flowers to the Lea family.