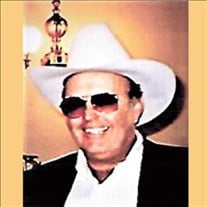 Bob was born on October 7th 1942, in Tulare California, to parents Dick and Lesta Anderson. He passed peacefully on March 17th 2022, surrounded by family. Bob attended Aurora country school then Waukena and graduated from Tulare Union High School. He was an All-Star player in Little League and later excelled in wrestling and football in high school. He played on the championship team as did his father and then his son and then a grandson, each 20 years apart. When he was 14 he started a hay hauling business with his cousin Corky Anderson. He received a scholarship to play football at Cal Poly but soon came home to marry his high school sweetheart, Bonnie Court. They celebrated 60 wonderful years together last July. After Bob and Bonnie were married, Bob worked on his dad's feedlot and later had Cubers and harvesters. In 1963 they moved to a cattle ranch in Northern California near Covelo, while living there they had 2 children, their son Mark, and their daughter Robyn. The family spent four years there, mostly the 4 of them but fed many during round up and deer season. Many a story came from those days. In 1974 Bob went to the west side and started farming under Vasto Valle Farms, where he made many friends. Later he and his brother started Anderson Brothers Aviation and had crop dusters, soon after, his son joined him and started to run the crop dusters. He was always proud of the farm, the friends he made, and the people who made Vasto Valle Farms what it was. Bob always remained a humble man. Bob served on the Huron Gin Board, Westside Fire Protection Board, Kingsburg Cotton, and the Garlic Board. He received the Fresno County Farm Bureau Award for farmer of the year(1998)and also the PTA founders day award for Garden School where his children attended. After Bobs first heart surgery he begin to slow down and smell the roses. He and Bonnie loved traveling across the United States together. Bob was also an avid hunter and even enjoyed golf when he was not getting frustrated with the game! He was a loving husband, father grandfather and great grandfather. He leaves behind His wife Bonnie, Son Mark Anderson and his wife Mari, Daughter Robyn Black. Grandchildren Michael Cardoza and wife Nickie, Lauren Anderson and fiance Patrick Anderes, Charlotte Schuill and husband Dirk, Weston Anderson and Wife Lauren, and Rhett Anderson. Great Grandchildren McKynlie, Cross, and Mayerson Cardoza and Ivy Schuill. He also leaves behind two Aunts, Gerry Soults and Billie Nell Steinbach, in addition to many family members. He was preceded in death by his parents Dick and Lesta Anderson, Brother Craig Anderson and his wife Sally, his in-laws, Loren and Ginger Court, and brother-in-law Brad Court. He spent the last year living at the beach in Cayucos, his favorite place beside Vasto Valle. Celebration Of Life Friday, March [email protected] 11:00am at The Woodlands 4211 W Goshen Ave. Visalia, CA 93291 In lieu of flowers please make donations to Gateway Church, 1100 S Sowell Visalia, Ca 93277 or a charity of your choice. Services have been entrusted to Salser & Dillard Funeral Chapel. Memorial Tributes and condolences may be offered by logging onto www.salseranddillard.com.

The family of Robert Weston Anderson created this Life Tributes page to make it easy to share your memories.

Send flowers to the Anderson family.