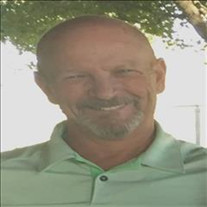 Scott Aldrich passed away peacefully on February 13, 2022 with his beloved wife and best friend, Jeralyn and wonderful son Drew holding his hands. Scott battled pancreatic cancer for twelve years. In spite of the extreme ups and downs of his health, he served God with all his might. Scott was the youngest of four siblings, and is survived by Robin (Jerry), Bob (Connie) and Jim (Della). He was born in Spokane, Washington and attended local schools. He was active in sports. Scott graduated from Washington State with a degree in communicative disorders and went to work in Visalia as a speech language pathologist. Scott worked in a private practice in home health care with stroke patients. Scott married Jenell and they had their son Drew and daughter Kelly. He began working for Tulare County Office of Education as a speech therapist and eventually became the program manager. Scott was divorced and re married Kim Behrens. He moved to Porterville where he lived with Kim and her three children, Ashley, Christopher, and Camille. After several years the marriage dissolved and Scott re dedicated his life to Jesus Christ. A few years later, Scott met a Christian woman, Jeralyn, while at work one day helping a client. He began attending Bethel Family Worship Center with Jeralyn and her daughter Rachelle. Scott mentored Rachelle into pursuing speech and language pathology. He and Jeralyn married and dedicated their marriage to Jesus Christ and His ministry. Scott served on staff and enjoyed going to homes and hospitals to pray for the ill. Scott and Jeralyn both served as bible teachers. Scott sent out a daily devotion to the men in his study and enjoyed teaching on Wednesday nights. 2 Timothy 4:7- 8 was Scotts favorite verse. I have fought the fight, I have finished the race, I have kept the faith Well done Scott. Scott leaves behind his and Jeralyns blended family of 4 childeren, Drew, Kelly, Ryan, and Rachelle. 4 Grandchildren, Kaleb, Jackson, Naomi, and Asher. Services have been entrusted to Salser & Dillard Funeral Chapel. Memorial Tributes and condolences may be offered by logging onto www.salseranddillard.com.

Scott Aldrich passed away peacefully on February 13, 2022 with his beloved wife and best friend, Jeralyn and wonderful son Drew holding his hands. Scott battled pancreatic cancer for twelve years. In spite of the extreme ups and downs of his... View Obituary & Service Information

The family of Scott Aldrich created this Life Tributes page to make it easy to share your memories.

Scott Aldrich passed away peacefully on February 13, 2022 with...

Send flowers to the Aldrich family.