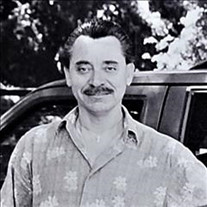 Rene Pe�a, a bus driver and long-time resident of Visalia, CA, passed away peacefully at his home on Monday, March 8, 2021 after a tough battle with cancer. His wife Rosalia Pe�a and family were with him throughout. Rene was born on April 25, 1960 in El Salvador to Mar�a Julia Garza. He, his two sisters, and mother, migrated to the USA in 1980 and have remained here since. He was married to his first wife in 1991 and together they had three children. In 2006 he met Rosalia, a mother of two children, and spent ten happy years together before marrying in 2016. Rene drove buses for a living and spent most of his career driving for the school district but also drove for other various bus companies. He particularly enjoyed working for Orange Belt Stages where he worked for thirty-three years and was able to meet new people and experience places all over North America. Rene loved to travel by bus or car, especially his annual trip to Canada or taking his family to his favorite places in California. He took his children on many bus trips, which are full of cherished memories. He will be remembered by his witty sense of humor, love of food, and dancing to his cumbias. He and Rosy frequented many local dance venues and he didn't hesitate to recommend songs to DJ's as he had the best taste in music. Rene had the ability to spark a conversation with anyone and established lifelong friendships with coworkers and people he crossed paths with in everyday life. He will be deeply missed by friends, family, and all who knew him. He is survived by his wife, Rosalia Pe�a; his step-children, Javier Ledezma and Bianca Ledezma; his children, Renee Pe�a, Joshua Pe�a, and Amber Pe�a; his grandchildren, Zack Lewis, Ian Lewis, and Ivy Pena; his sisters, Carmen Pacheco and Doris Pena; his niece, Yanira Greene; and his nephews, Robert Aguilera and Gabriel Guerrero. He is predeceased by his mother, Mar�a Julia Garza.

Rene Pe&#65533;a, a bus driver and long-time resident of Visalia, CA, passed away peacefully at his home on Monday, March 8, 2021 after a tough battle with cancer. His wife Rosalia Pe&#65533;a and family were with him throughout. Rene was born... View Obituary & Service Information

The family of Rene Pena created this Life Tributes page to make it easy to share your memories.

Send flowers to the Pena family.