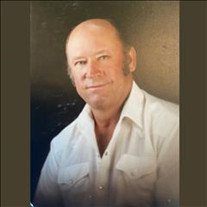 Tulare - Raymond Lee Westbrook, 85, of Tulare, died Wednesday June 30, 2021. He was a Farmer in Pixley, California. He was born in San Angelo, Texas to his loving parents Charles and Bonnie Westbrook on April 13, 1936. Raymond and his family moved to California to continue their farming practices in 1941. He was raised on his parents' farm in Pixley and attended Pixley Elementary School, and he graduated in 1955 from Delano High where he played football. He married his High School sweetheart Barbara Grogan in August 1955. Together they raised 3 children Marsha, Sharon and Neal. Raymond enjoyed working with his children in 4-H with their animals at the fairs. He was a board member for the Pixley Irrigation District for 27 years. He served as Vice-President from January 2006 to January 2009. He was a member of Tulare Elks Lodge. He loved traveling with family and friends in their RV Trailer around the United States and Canada. He LOVED going to Las Vegas yearly in December for the National Rodeo Finals. He enjoyed watching his Grandchildren and Great-Grandchildren grow up. Survivors include his loving Wife Barbara of 65 years, his 3 children Marsha Williams (Jim) of Kingsburg, Sharon Dollinger (Mike) of Visalia, and Neal Westbrook (Robin) of Pixley. Sister Mollie Jensen of Stockton, Sister-in-Law Betty Westbrook, Brother-in-Law and Sister-in-Law Dick & Ann Grogan. 6 grandchildren Travis Williams, Tracy Alexander (Gray), Kris Dollinger (Aarika), Cameron Hop (Nathan), Adam Westbrook (Audrey), Ashton Westbrook. 9 Great-Grandchildren Kimberly, Kylie, Kayden, Michael Rose, Ace, James, Alivia, Frank, and Nash and numerous nieces and nephews. He is preceded in death by his Parents Bonnie and Charles Westbrook, Brother's Donald Westbrook and Forest Westbrook, Sister-in-Law Donna Westbrook, Mother and Father-in-Laws Amy and Irving Grogan and Son-in-Law Jim Williams. Remembrance may be sent to Angel Flight West at 3161 Donald Douglas Loop South, Santa Monica, CA 90405, American Heart Association 7425 N. Palm Bluffs Ave. Fresno, CA 93711, American Diabetes Association (Northern) P. O. Box 7023 Merrifield, VA 22116-7023. In Lieu of Flowers. Graveside service will be July 9, 2021 at the North Tulare Cemetery at 10 am. There will be a viewing at Salser & Dillard Funeral Chapel in Visalia on July 8, 2021 from 5 to 7 pm.

Tulare - Raymond Lee Westbrook, 85, of Tulare, died Wednesday June 30, 2021. He was a Farmer in Pixley, California. He was born in San Angelo, Texas to his loving parents Charles and Bonnie Westbrook on April 13, 1936. Raymond and his family... View Obituary & Service Information

The family of Raymond Lee Westbrook created this Life Tributes page to make it easy to share your memories.

Send flowers to the Westbrook family.