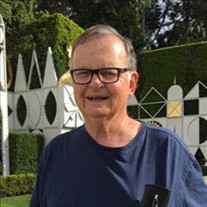 Ray Clifton Henderson, a resident of Visalia, passed away in Visalia, CA on Monday, December 27, 2021. He was born in Tulare, CA on January 15, 1948 to Hess and Zella Henderson. He was 73. Ray grew up in the Saucelito/Porterville area. He worked out in the fields while growing up, helping Hess farm the land that they lived nearby. He graduated from Porterville High School in 1966 and soon after graduated from Porterville College. After graduation he joined the workforce at the Lindsay Olive Plant for a short time. He began working for Tulare County on March 10, 1970 and retired on July 20, 2007. He worked mainly in collections during his 37 years of service. He married Maureen on July 8, 1972 and celebrated 44 years of marriage with her until her passing on December 13, 2016. Ray resided in Tulare county but loved to get out to see and enjoy other places, including taking short drives locally. He loved getting over to the coast and continued to make regular trips to the central/southern central coast area his entire life. He also enjoyed travel beyond this area and took many trips to points of interest in California and the United States. In his travels, The San Francisco Giants topped his California travel list, and he enjoyed many Giants games in the Bay area with family and friends. He became a Giants fan as a kid when the team moved to California in 1958 and relished the fact that he attended a winning Giants World Series game in 2014. He enjoyed baseball, in general, and visited some baseball stadiums outside of California, and every baseball stadium in California. Ray loved family and friends and enjoyed spending time with them, especially group/family meals and get togethers. He fondly remembered the family picnics at various parks over the years, locally and in the Fillmore area. He loved animals, especially dogs. He had a playful sense of humor and loved to laugh and get others laughing. He enjoyed music, song, concerts, and Broadway shows. It was normal for him to break out into song when someone uttered words that he knew were lyrics in a song. Jen and Kristin learned many popular oldies songs over the years since a simple utterance could produce a song clip from Ray. Ray was preceded in death by his wife Maureen Henderson and his parents, Hess and Zella Henderson. Ray is survived by his daughters; Jennifer Henderson of Hanford and Kristin Henderson of Visalia and his brother; Glen Henderson of Porterville. He is also survived by many cousins and dear friends whom he loved very much. Viewing will be held 4 PM - 6 PM Tuesday, January 18th, 2022 at Salser & Dillard Funeral Chapel, 127 E. Caldwell Ave., Visalia. Prayer Service will be held 10:30 AM - 11:30 AM Wednesday, January 19th, 2022 at Salser & Dillard Funeral Chapel, 127 E. Caldwell Ave., Visalia. Graveside services will be held 12 PM - 1 PM Wednesday, January 19th, 2022 at Visalia District Cemetery, 1300 W Goshen Ave, Visalia. In lieu of flowers, donations may be made to The Association for Frontotemporal Degeneration. Services have been entrusted to Salser & Dillard Funeral Chapel. Memorial Tributes and condolences may be offered by logging onto www.salseranddillard.com.

Ray Clifton Henderson, a resident of Visalia, passed away in Visalia, CA on Monday, December 27, 2021. He was born in Tulare, CA on January 15, 1948 to Hess and Zella Henderson. He was 73. Ray grew up in the Saucelito/Porterville area. He... View Obituary & Service Information

The family of Ray Clifton Henderson created this Life Tributes page to make it easy to share your memories.

Ray Clifton Henderson, a resident of Visalia, passed away in...