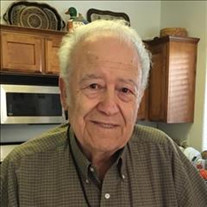 Ralph Hernandez Camacho passed away peacefully in his home on Sunday, August 1, 2021, at the age of 93. Ralph was born in San Martin Hidalgo, Jalisco, Mexico, on April 12, 1928, grew up in Ameca, Jalisco, Mexico, then immigrated to California's Central Coast as a young adult. In 1952, he met Dolores Quiroz while working in Del Rey, California. They married in December 1952 and settled in the small town of Guadalupe, California where they began raising 5 children. In 1968, they moved to Santa Maria where they lived until relocating to Visalia in 2005. Ralph's early career included working for the Guadalupe Cemetery District and as an agricultural worker. Later, while employed with Union Sugar, he learned of the opportunity to work as a construction laborer. He was a member of the Laborers' Union and continued until his retirement in 1983. During his career, he had opportunity to work on numerous bridge and highway projects, but his favorite job assignments were at Vandenberg Air Force Base where he participated in the construction of missile silos other government projects. At home, Ralph was Mr. DIY. There was nothing he couldn't build or fix. He enjoyed spending hours tinkering in his garage. He refused to pay to have anything done that he figured he could do himself. Ralph was always hard-working and proud of supporting his family. Character, integrity, and responsibility were core values. Ralph was preceded in death by his wife, Dolores, and son, Ralph Camacho, Jr. He is survived by 3 sons, Dan Camacho and wife, Rose, of Friant, Ray Camacho and wife, Laura, of Santa Maria, George Camacho of Santa Maria, and daughter, Rachel Hagans and husband, Mike, of Visalia, 2 sisters, 3 brothers, 8 grandchildren, 7 great-grandchildren, and numerous nieces and nephews. Service will be held Saturday, August 14, 2021, 10:00 a.m. at Salser & Dillard Funeral Chapel. Services have been entrusted to Salser & Dillard Funeral Chapel. Memorial Tributes and condolences may be offered by logging onto www.salseranddillard.com.

Ralph Hernandez Camacho passed away peacefully in his home on Sunday, August 1, 2021, at the age of 93. Ralph was born in San Martin Hidalgo, Jalisco, Mexico, on April 12, 1928, grew up in Ameca, Jalisco, Mexico, then immigrated to California's... View Obituary & Service Information

The family of Ralph Hernandez Camacho created this Life Tributes page to make it easy to share your memories.

Ralph Hernandez Camacho passed away peacefully in his home on...