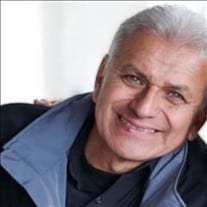 Peter Paul Rodriguez "Pete" was born in Tulare, CA. November 22, 1959 to Trinidad Rodriguez and Frances Mata Rodriguez. Peter passed from this life November 1, 2021 in Visalia, CA., at the young age of 61. He was baptized in Jesus Name at the age of 13 in the "Old Church" of Orosi by Rev. Joseph Dominguez. Peter married Angie Gomez of Farmersville, CA., on December 23, 1978 in Orosi, CA., by Rev. Carl Helms. Peter and Angie were married for 43 years. They had 6 kids together, Flora Gomez 48 of Cutler, Angelic Guerrero 44 (Pastor William Guerrero) of Visalia, Nadine Yzaguirre 42 (Rev. Richard Yzaguirre) of Selma, Peter Rodriguez 40 (Amanda) of Fresno, Marie Smith 36 (Tyler Smith) of Visalia and Heavenly Rodriguez 16 of Visalia. They had 25 grandchildren, Silvester, Angela, Jacob, Soloman, Flora, Nicholas, Daisy, Angel, Jonathan, Megan, Austin, Logan, Karis, Lauren, Audree, Celine, Ava, Perla, Isaiah, Lexi, Peter, PJ, Laila, Noah and Layla. They had 8 great grandchildren, Uriah, Xaiah, Josiah, Conrad, Ezekial, Aria, Alena and Xena. Peter was preceded in death by his siblings Vicky Mendoza, Trinidad Rodriguez, Petra Bettencourt, Vera Paradez, Jesse Rodriguez, Laura Hernandez, Gabby Villanueva, Frances Espirito, Benny Federico Rodriguez, Donaciano Rodriguez and his parents Frances Mata Rodriguez (mother) and Trinidad Rodriguez (father). Peter is survived by his wife Angie Rodriguez of Visalia, CA., their children, and grand children. By his siblings Lupe Villanueva of Dinuba, Sam Rodriguez of Sultana, Ricky Rodriguez of Fresno and Noe Rodriguez of Southern CA. Peter had a strong work ethic. His family migrated to Oregon, Washington and back to California following the farm labor work. As most Mexican-American families, children begin to work at an early age, he was no exception. Peter began to work and developed a very strong work ethic. At the age of 16, he was working 3 jobs. He worked for United Market and also Champion Homes building mobile homes. Peter was hired with Cutler-Orosi School District as a Night Custodian/Bus Driver. He worked his way up and became a Lead Supervisor. He worked for the district for 25 years before moving on. After working for the District, he served as a School Board Member. He enjoyed being involved and felt it was important to be a part of the betterment of the community. In his last 6 years, he worked for The City of Tulare in the Maintenance Department. Peter's life consisted of his strong belief and love for God/Church and Family. He attended church with his mother at an early age and was baptized at the age of 13. Unfortunately he drifted away. When he was 21 he surrendered his life to The Lord, he received the baptism of the Holy Ghost and his life was changed. He began to serve God with all of his heart, mind and soul. He served in the Church as a Bus Driver, Sunday School Teacher, Youth Leader and Assistant to the Pastor. He served as assistant to Elder Carl Helms, Elder Robert Baglin, Elder Kenny Baglin and William Guerrero. He responded to the call of God to the Ministry. In 1994 at the age of 35, he received his Local Minister's License through the United Pentecostal Church Organization. He later received his General License. In 2006 he became an Ordained Minister and opened the doors to the Home Missions Church in Farmersville. In 2009 the doors to the Church were forced to close and they returned back to the home Church. From that time to the present, he served in the local Church Faithfully. Peter continued to keep his ministry active, he taught Sunday School, the Adult Class, Youth Services and served as an Assistant to the Pastor at First Pentecostal Church of Orosi. Peter had strong family values and ethics. He believed in family and loved them all. He loved his wife Angie of 43 years, they were not only husband and wife but the best of friends. His family could see and feel the love they had for each other. He enjoyed taking bike rides or simply taking walks with his kids and grandkids to the park or around the block. He had special names for all his grand daughters. He enjoyed working on cars or anything mechanical. His grandsons knew that if it was broken, grandpa can fix it. His special time of the year was the month of November. He enjoyed it so much because of his birthday but most importantly because of Thanksgiving. It was a time that all his family would gather together for the holiday and he enjoyed nothing more than having his family together. He enjoyed taking drives to the mountains, to the coast and truly loved camping. He enjoyed watching his children and grand children grow and develop into productive and responsible citizens. He was very proud and would glow when speaking of their accomplishments. He would always say, "I enjoy watching my kids grow up." Peter was truly a "Family Man." Peter loved God's Word. He lived by Matthew 6:33 "But seek ye first the kingdom of God, and his righteousness; and all these things shall be added unto you." Peter Paul Rodriguez will be greatly missed by his family, friends and all who came in contact with him. He impacted and touched so many lives. He was a true example of a husband, father, grandfather, friend, brother and a Christian. We look forward with great anticipation for that great reunion in the sky!

Peter Paul Rodriguez "Pete" was born in Tulare, CA. November 22, 1959 to Trinidad Rodriguez and Frances Mata Rodriguez. Peter passed from this life November 1, 2021 in Visalia, CA., at the young age of 61. He was baptized in Jesus Name at the... View Obituary & Service Information

The family of Peter Paul Rodriguez, Sr. created this Life Tributes page to make it easy to share your memories.

Send flowers to the Rodriguez family.