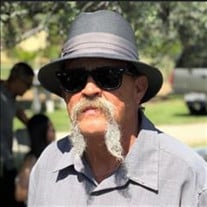 Pete Joe Moreno, lovingly known as Bebo. He was born and raised on the 1400 block of Encina Street in Visalia, CA. He was born to Antonio and Juanita along with several brothers and sisters. Throughout his life, Bebo held many titles. Musically, he was a drummer in the band that he had with his relatives called "The Deseries". As a young adult he was known as the President of one of Visalia's historical groups called the Nightwalkers. He was also apart of the "Brown Beret" March. Everyone who grew up in this town knew who he was. He had that knack of popularity. One of his best known attributes was being a "barrio artist". Bebo made portraits, free handed tattoos and created beautiful art. As a career, he became a fabrication welder for over 30 years. With his artistic talents and steady hand, he created metal art pieces. Ranging from metal roses, crosses and motorcycles, to name a few. When Bebo was not working, he enjoyed sitting in his front yard and spending time with family and friends. Bebo then gave himself to The Lord and served many years doing God's work. He did Jail ministry and drew people closer to the Lord. He spent 43 years with his companion and partner Jenny Valencia, who stayed next to his side through his remaining years. He loved his children, grand children and great grandchildren. Sons, David Moreno (Dianna) and Pete Moreno Jr., daughters, Valerie Moreno, Vanecia Moreno Gutierrez (Richard) and Alana Moreno. Grandchildren Michelle Moreno, Marcus Paz (Alyssa), Jordyn Gayton (Jesse), Ashlee Moreno, Nicholas Moreno, Matthew Moreno and Myah M. Gutierrez (aka "Aikins"), as well as Great-Grandchildren Fernando and Alayah Paz. He leaves behind Ruben Moreno, Carmen Huerta, Phillip Moreno, Margie Marquez and other siblings, "compas",in-laws, numerous nieces and nephews and many friends. He was proceeded in death By his parents, daughter Myra, brother Louie and many beloved relatives and friends. Bebo passed on June 12 2021 on the 1400 block of Encina Street where he sat in his chair under his tree, watching the days pass by. He will be missed by his family, friends and countless others whose lives were touched by his presence. Memorial services will be held 10:00 AM Sunday, June 27th, 2021 at Salser & Dillard Funeral Chapel, 127 E. Caldwell Ave., Visalia. Services have been entrusted to Salser & Dillard Funeral Chapel. Memorial Tributes and condolences may be offered by logging onto www.salseranddillard.com.

Pete Joe Moreno, lovingly known as Bebo. He was born and raised on the 1400 block of Encina Street in Visalia, CA. He was born to Antonio and Juanita along with several brothers and sisters. Throughout his life, Bebo held many titles. Musically,... View Obituary & Service Information

The family of Pete Joe Moreno created this Life Tributes page to make it easy to share your memories.

Pete Joe Moreno, lovingly known as Bebo. He was born and raised...

Send flowers to the Moreno family.