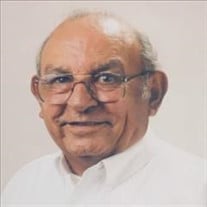 Deacon Paul Hernandez, 77 years of age from Visalia, Ca., passed away peacefully on February 8th, 2021, in the presence of his family. He was born January 11, 1944 in Laredo, Tx. to Maria de Jesus Hernandez. In 1957, age 13, Deacon Paul attended Father Flanagan's Boys Town in Omaha, Nebraska until he graduated high school in 1963. He made memories with his three brothers who also resided at Boys Town with him. In addition to being an athlete, he toured the country singing with the Boys Town Choir. Deacon Paul briefly returned to Laredo, Tx while waiting to begin his four years of service in the United States Navy. In this time, Deacon Paul fell in love with San Juanita "Nita" Guerrero. While in the Navy, Deacon Paul corresponded with Nita often. He became the Signal Man for the U.S.S. Embattle Search and Destroy, guiding the Naval fighter pilots during the Vietnam War. After his military service, Deacon Paul moved to Cutler, Ca and married Nita. Together they raised two children, Paul Hernandez Jr. and Cynthia (Hernandez) Gutierrez. In 1977, he moved his family to their home in Visalia, Ca. He was a loving husband and father always working diligently to provide for his family. He was active in his children's education, sporting events, and musical endeavours. He worked for Westinghouse designing electrical switchboards for 24 years before starting his own lawn service. During this time, he began serving at Holy Family Catholic Church as the Choir Director and leader of various ministries. Deacon Paul joined the Diaconate formation classes becoming the first group of Deacons to be ordained on January 11, 2003 in the Diocese of Fresno. He dedicated his life to the community celebrating masses, weddings, baptisms, and funerals. He was even honored to baptize many of his grandchildren. Deacon Paul took great pleasure in counseling engaged couples, couples who were in need, and individuals battling with their personal trials. He was often asked to bless homes and offer prayer. He learned and began making rosaries for Our Ladies Rosary Makers, which provided rosaries to confirmation students, hospitals, and church ministry groups. Once retiring from the Good Shepherd Catholic Church in Visalia one year ago, he dedicated his days to making up to 20 rosaries per day. Deacon Paul will be lovingly remembered by San Juanita Hernandez, his wife of 53 years. He is survived by his two children, Paul Hernandez Jr. and Cynthia Veronica Gutierrez. His daughter-in-law, Mariana Matei Hernandez and son-in-law, Jose Luis Gutierrez. Deacon Paul will be remembered by his seven grandchildren Audree Pena, Paul Hernandez III, Marissa Hernandez, Emma Hernandez, Gabriela Gutierrez, Nicolas Gutierrez, and Carlo Gutierrez. He will also be remembered by his 9 great grandchildren. He is survived by his brothers Santiago Hernandez, Guadalupe Hernandez, Juan Hernandez and his sister Gloria Perez. The family would like to thank the 3W nursing team and physicians at Kaweah Delta District Hospital for the exceptional care and compassion in Deacon Paul's final days. The Department of Veteran's Affair physicians were an integral part of his care, especially Dr. Sharmila Fernandez. We thank everyone for all the love, support, and prayers. Services will be held Friday, February 19th at St. Mary's Church in Visalia, Ca. Viewing will be held at 8:30am, rosary service at 10am, and funeral mass at 10:30am followed by a graveside ceremony at Smith Mountain Cemetery. Condolences may be offered by logging onto www.salseranddillard.com .

Deacon Paul Hernandez, 77 years of age from Visalia, Ca., passed away peacefully on February 8th, 2021, in the presence of his family. He was born January 11, 1944 in Laredo, Tx. to Maria de Jesus Hernandez. In 1957, age 13, Deacon Paul attended... View Obituary & Service Information

The family of Deacon Paul Hernandez created this Life Tributes page to make it easy to share your memories.

Send flowers to the Hernandez family.