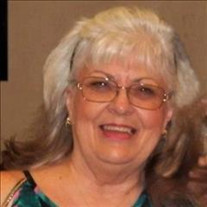 Pamela Gayle Caine went to be with the Lord on Friday, Oct. 29th, 2021 after a short illness. She was born March 24th, 1949 to Alvin Holman Krug & Evelyn Frances (Pat) Woodward Krug in Visalia, Tulare Co., California where she lived all her life. She & her family were well known members of the Gateway Church in Visalia for over 65 years and attended regularly. She became the bride of Thomas Jefferson Caine March 24, 1975 in Reno, Washoe Co., Nevada and made their home here in Visalia, Ca where they raised one daughter Shannon Lea Caine Gilbert & later welcomed two grandsons, Zakary & Austin Gilbert. Alongside her husband, she attended & participated in The Valley Cycle Association for over 40 years. She loved taking pictures, socializing with friends and eventually becoming the "First Lady" when her husband, Tommy, became president of the VCA. She and her sister-in-law were officially recognized as the "historians" for the association. She was never without her camera. Her friends and family most remember her for her love of various crafting, picture taking and her sweet personality. It was not uncommon of her to pick flowers from your yard then surprise you with an arrangement of beautifully pressed dried flower gifts in the way of a picture or a bookmark. Always beautiful & made with love. Pam had an adventurous spirit and a smile on her face, who reached for success early in life and perfected everything she did including battling & winning colon cancer later in her life. She lived life to its best. She tested for the CIA and passed, attending Stewardess School and one friend said she was extremely fast typist. She ultimately started her family and took a job at Moore Business Forms where she was a typesetter in the art department. After retirement, she took a job with a local sign company but decided her grandsons were the loves in her life and took time off to care for them. She also served on her class reunion committee with her lifelong high school friends and would meet for lunch to just socialize. She leaves behind her husband, Tommy, daughter Shannon of Dinuba, Ca., grandson's Zakary & Austin of Visalia, Ca., a brother Dennis Krug of Fresno, Ca., a sister Sherry Keller of Visalia, Ca., various nieces, nephews & cousins, and all her friends who are too numerous to mention. Preceding her in death were her parents, AL & Pat Krug, paternal grandparents William & Syble Krug, maternal grandparents Roy & Alveta Woodward. By her own request, she will be cremated. No services are scheduled at this time. Donations can be made to your favorite charity or to the Cancer Society. If you wish to have a remembrance of Pam, you may contact Salser & Dillard Funeral Chapel, 127 E. Caldwell, Visalia, Ca. or call 559-635-1144 to view their memorial selections. To the sweet joy of life so loved, Oh God let her rest in your arms above.

Pamela Gayle Caine went to be with the Lord on Friday, Oct. 29th, 2021 after a short illness. She was born March 24th, 1949 to Alvin Holman Krug & Evelyn Frances (Pat) Woodward Krug in Visalia, Tulare Co., California where she lived all her... View Obituary & Service Information

The family of Pamela Gayle Caine created this Life Tributes page to make it easy to share your memories.

Pamela Gayle Caine went to be with the Lord on Friday, Oct. 29th,...

Send flowers to the Caine family.