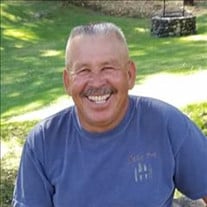 Oscar Q. Godinez, 62, passed away peacefully on Sunday, October 17, 2021, at his home. He was born on June 25, 1959, in Guadalajara, Jal., Mexico to J. Jesus Martinez Godinez and Evelia Conchas Quezada. He was the eldest of seven brothers. As a young adult he moved to Los Angeles, California, where he would embark on his journey to reach the American dream. He spent quality time and built loving relationships with his family that would last a lifetime. Oscar moved to Tulare, California, in the early 1980's where shortly after, he would marry his loving and devoted wife, Esther, of 39 years. They had two children, Kristian and Christopher and raised their family in Visalia, California. Oscar will be remembered for his warm-inviting smile, sense of humor, and most of all he was always willing to lend a helping hand. After a hard day's work, he enjoyed spending time with his family, whether it was swimming and grilling in their beautiful backyard, watching the game, gardening or just hanging out. He was a die-hard sports fan! If you think back, you can envision him wearing Raiders, Lakers, Chivas, or Dodger's apparel. Oscar's most cherished treasure were his grandchildren, Charisma, Michael, and Aaron. They meant the world to him. He is preceded in eternal rest by his Father, J. Jesus Martinez Godinez, Mother, Evelia Conchas Quezada, Grandmother, Irene Quezada. He leaves to honor his memory, his Wife Esther Aleman Godinez, Daughter- Kristian (Manuel), Son - Christopher (Roxanne), Brothers- Ruben (Georgina), Guillermo (Dubis), Jose Luis (Alma), J Jesus (Lourdes), Edgar Ulises (Maricela), Ivan Jairo, and Brayan Neker. He is also survived by several in-laws, aunts, uncles, cousins, nieces, nephews, and friends who all loved him dearly.

Oscar Q. Godinez, 62, passed away peacefully on Sunday, October 17, 2021, at his home. He was born on June 25, 1959, in Guadalajara, Jal., Mexico to J. Jesus Martinez Godinez and Evelia Conchas Quezada. He was the eldest of seven brothers. As... View Obituary & Service Information

The family of Oscar Godinez Quezada created this Life Tributes page to make it easy to share your memories.