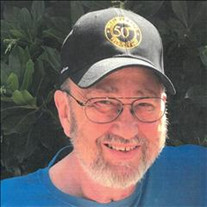 Richard Michael Peden, "Mike" passed away on Thursday, October 7, 2021. He was born to David and Lula Peden on October 19, 1949 in Exeter. He graduated from Woodlake High School in 1967 where he played football, basketball, and was on the swim team. After high school he attended College of the Sequoias. On February 14, 1969, he married Sharon King and they moved to Santa Cruz where they had their first child, Kristi. They soon after moved to Hanford, before settling in Visalia where their second daughter, Sherri was born. Mike and Sharon were married for 30 wonderful years before her sudden passing in 1999. After losing Sharon, Mike was blessed to find love again and married Judy Baker on January 25, 2000. In those early years of the 1970's, he enjoyed talking on his CB and HAMM radios. He was known as Diamond Cutter among several radio groups. In 1985, he joined the Mighty Oak Chorus performing and competing singing barbershopmusic. The family attended Visalia First Assembly of God together where he and Sharon both enjoyed singing in the worship choir, performing in numerous musical productions over the years. Mike worked for many years as a machinist for Diamond International in Exeter. In 1983, he went back to school graduating with a degree in accounting from Central California Commercial College. Over the next 20 or so years, Mike worked as a bookkeeper for Paramount Citrus, Ron Berry's Carpets, Kerr Rug and DalTile. Around 2004, Mike started a new chapter in his life driving bus for the Visalia Unified School District. He thoroughly enjoyed seeing all the kids at the beginning and end of their school day. He worked long days driving kids home from the afterschool program. He logged countless miles for field trips, grad nights at Disneyland, football games and many other sporting activities. He made a huge impact on numerous children and their families over the years. In June of 2016, Mike retired from driving for VUSD, but he couldn't completely stop driving the big yellow bus. He worked part time for 2 years driving for Mid Valley Transportation before he officially retired on August 25, 2018. Together, Mike and Judy enjoyed going to baseball games, traveling to the coast and recently had a fabulous cruise vacation with friends. Over the last several years, Judy and Mike also took annual trips to Kennedy Meadows where he could always be found down by the water's edge fishing. He looked forward to years of retirement where he could go fishing more often. Mike enjoyed flying his RC airplanes with the Condor RC Club, and all who knew Mike knew he loved baseball and the San Francisco Giants, as he was generally seen wearing a Giants baseball tee shirt and hat. He enjoyed telling silly dad jokes, especially puns. He is survived by Judy, his loving wife of 21 wonderful years; his daughters, Kristi (Greg) Roedell of Alpine, Sherri (David) Jacobsen of Phoenix, four grandchildren; Ashlee (Drew) Rodgers, Aaron (Brandi) Roedell, Carter & Ella Jacobsen, and great grandson, Mitchell; brother David (Belva) Peden of Visalia, and brother in-law Michael Cochran of Placentia. Mike is also survived by three stepchildren, Sheri Baker, Ryan Baker, and Marisa Baker all of Visalia and 7 step grandchildren: Christian, Cassidy, Tristan, Faith, Braden, Mackenzie, and Zoey. Mike loved ALL his children, stepchildren, grandchildren and step grandchildren equally. He was very so very proud to be a great grandfather and couldn't wait for more! He loved God and his country; he was a proud American patriot. He was a fun loving, hardworking, honest man and he will be missed by all who knew him. He is preceded in death by his first wife Sharon, his parents David and Lula Peden, and his sweet sister, Christine Cochran. Friends and family are invited to celebrate his life, Monday November 8 at 11:00 at Seventh-day Adventist Church, 1310 W. Woodland Ave, Visalia. Services have been entrusted to Salser & Dillard Funeral Chapel. Memorial Tributes and condolences may be offered by logging onto www.salseranddillard.com.

Richard Michael Peden, "Mike" passed away on Thursday, October 7, 2021. He was born to David and Lula Peden on October 19, 1949 in Exeter. He graduated from Woodlake High School in 1967 where he played football, basketball, and was on the swim... View Obituary & Service Information

The family of Mike Peden created this Life Tributes page to make it easy to share your memories.

Send flowers to the Peden family.