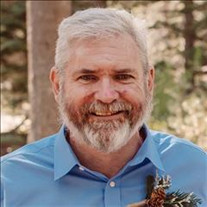 On October 13, 2021, Michael (Mike) Sean Fitzgerald took his last sleep at age 57 in his home in Visalia, CA. Mike was born August 7, 1964, in Visalia, CA to Judith and the late Richard Fitzgerald. He grew up with his two younger brothers, Tim and Keith. He spent his childhood outside playing in the country, helping his dad in the grove, and gazing at the Sierra Nevada's. While attending Golden West high school he made lifelong friends and would skip class for adventures in the mountains. He graduated in 1983 with the first graduating class of Golden West. After attending College of the Sequoia's, he continued the family legacy in Agriculture. He worked for Fruit Growers in the 1980s where he developed his career as an irrigation designer. He later made the move to Reedley Irrigation (�98) where he continued irrigation design. In the mid-2000's Mike was hired by Agri-Valley as a manager. In 2014 Mike began his own irrigation design business, Precision Irrigation. He passionately grew his business with the connections he'd made from his years of service to the agriculture community. In April 1991 Mike married Susan Wolfe. He and Susan had their first child, Rachel, in October 1994, in April 1997 they had their second child, Sean. Mike was known for his quick wit, his fascination with all genres of music, his passion for new adventures and his love for backpacking, camping, skiing, biking, and walking. Mike instilled his enthusiasm for the Sierra Nevada's to his two children who continue to live out his legacy in agriculture, adventure, and love of music. Mike was a kind-hearted, stubborn, misunderstood, hard-working father and is missed dearly. Mike is preceded in death by his father Richard Fitzgerald. Mike leaves behind his children Rachel (Brandon) Cisneros and Sean Fitzgerald, his mother Judith Fitzgerald, his girlfriend Nicolle Veatch, his four-legged fur children Trixie and Charlie, his two brothers Tim (Lynette) and Keith Fitzgerald, and two nieces Miranda (Nick) Norman and Breanna Fitzgerald, and the mother of his children Susan Fitzgerald. The Rosary will be prayed 10am Saturday, January 22, 2022 at Salser & Dillard Funeral Chapel, 127 E Caldwell Ave, Visalia, CA. Celebration of life will be held in the Sierra Nevada's on August 6, 2022, please contact the family if you are interested in joining us. Services have been entrusted to Salser & Dillard Funeral Chapel. Memorial Tributes and condolences may be offered by logging onto www.salseranddillard.com.

On October 13, 2021, Michael (Mike) Sean Fitzgerald took his last sleep at age 57 in his home in Visalia, CA. Mike was born August 7, 1964, in Visalia, CA to Judith and the late Richard Fitzgerald. He grew up with his two younger brothers, Tim... View Obituary & Service Information

The family of Michael Sean Fitzgerald created this Life Tributes page to make it easy to share your memories.

Send flowers to the Fitzgerald family.