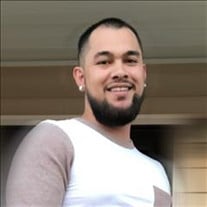 Matthew Charles Corfman passed away on September 23, 2021. He was born November 3, 1989 in San Diego, California. He was the third of five children born under the parentage of Minerva and Michael Corfman. In 1993, the family moved to Lemoore, California where Matthew attended school and graduated from Lemoore High School in 2009. A year after graduating, Matthew became a father and enlisted in the United States Army and served 8 years for his country. During his time of service, he received many medals and awards being discharged honorably in 2018. While serving his country, Matthew met the love of his life Cheyenne Dukes in 2012 and later they joined in holy matrimony at Folly Beach, South Carolina in the year 2017. Matthew Charles Corfman was preceded in death by his mother Minerva Corfman. He leaves to cherish his memory his devoted and loving wife of 4 years, Cheyenne Dukes Corfman, his father Michael Corfman, his grandmother Norma Corfman, his daughter Amiyah X. Corfman, and from his union with Cheyenne two sons, Bryson C. Dela Cruz and Joziyah R. Dela Cruz. Two sisters, Michelle Corfman and Monica Corfman. Two brothers, Mark Corfman and Montel Corfman (Jayda). A host of nieces, nephews, aunts, uncles, cousins, in-laws, and an abundance of other relatives and friends who will dearly miss him and forever remember how much he loved each of them wholeheartedly. Service Of Remembrance services will be held 1pm Thursday, October 7th, 2021 at Salser & Dillard Funeral Chapel, 127 E. Caldwell Ave., Visalia. Services have been entrusted to Salser & Dillard Funeral Chapel. Memorial Tributes and condolences may be offered by logging onto www.salseranddillard.com.

Matthew Charles Corfman passed away on September 23, 2021. He was born November 3, 1989 in San Diego, California. He was the third of five children born under the parentage of Minerva and Michael Corfman. In 1993, the family moved to Lemoore,... View Obituary & Service Information

The family of Matthew Charles Corfman created this Life Tributes page to make it easy to share your memories.

Send flowers to the Corfman family.