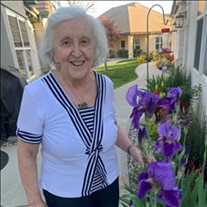 On Tuesday, April 20, 2022, Maria Cesarina "Ches" Hipskind, loving widow, and mother of three children, was called home by our Lord at the age of 87. Ches was born on May 8th, 1934, in Milan, Italy to Ernesto and Rina (Storma) Brambilla. She received her teaching credentials in Milan and then London, England. On Feb 11th, 1960, she married John Euclid Hipskind. They raised three sons, John, Stefan and Alex. She taught, kept the books for the family hand cream business and was a librarian in Roselle, IL. Ches was a lifelong fan of the soccer team AC Milan. She loved to garden and was a past member of the Visalia Garden club. Her flowers were a source of joy for her and admired by her wonderful neighbors at Sierra Village. She spoke several languages, was proud of being a naturalized US citizen, and was an avid soccer mom and then doting Nonna. She was known for her sharp sense of (often politicized) humor, fine Italian culinary skills, and compassionate spirit. Ches was preceded in death by her father, Ernesto, her mother, Rina, her brother Stefano and her devoted husband of 52 years, John. She is survived by her three sons, three daughters-in-law, ten wonderful grandchildren and innumerous loving cousins, nieces, nephews and extended family both in the United States and Italy. A funeral mass will be held on Wednesday, April 27th, at St. Mary's Church on 608 N. Church Street at 10:30 in the morning. Flowers may be sent to Sierra Village, Village Center, 1 Molenstraat, Visalia, CA 93277. In lieu of flowers, Nonna's favorite charities were the Red Cross, the SPCA and the Visalia Rescue Mission. Services have been entrusted to Salser & Dillard Funeral Chapel. Memorial Tributes and condolences may be offered by logging onto www.salseranddillard.com.

On Tuesday, April 20, 2022, Maria Cesarina "Ches" Hipskind, loving widow, and mother of three children, was called home by our Lord at the age of 87. Ches was born on May 8th, 1934, in Milan, Italy to Ernesto and Rina (Storma) Brambilla. She... View Obituary & Service Information

The family of Maria Cesarina Hipskind created this Life Tributes page to make it easy to share your memories.

Send flowers to the Hipskind family.