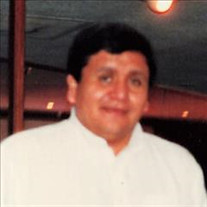 Luis Vasquez, 68 of Visalia, California, died on Tuesday, April 5, 2022, in Los Angeles, California. Luis was born to Refugio Vasquez and Della Rogriguez on September 22, 1953 in Corcoran, California. Luis grew up in Corcoran and graduated from Corcoran High School. Luis was very bright and became a self-taught Auto-cad Engineer. During his 40-year career he worked for many, many companies all over the Country in States such as New York, Washington DC, Baltimore, Nevada, Idaho, Washington, Chicago, Philadelphia, Arizona and California. He met Nancy Koi in Thousand Oaks, CA and they later married in Las Vegas, NV in 1990. Luis enjoyed spending time with his grandchildren, traveling and visiting casinos. He is survived by his son, Sean Vasquez; six grandchildren, Carolyn Vasquez, Hayley Barnes, Ethan Vasquez, Nathan Vasquez, Brandon Vasquez, and Braidon Vasquez; two stepchildren Bob Koi and Penny Koi; sister Mona Vasquez and his four nephews and one niece. He is preceded in death by his parents, Refugio and Della Vasquez, his wife Nancy Vasquez and one brother, Frank Vasquez. Luis will truly be missed by all who loved him. Mass of Christian Burial will be celebrated 10am Thursday, April 21st, 2022 at Our Lady of Lourdes Catholic Church, 1404 Hanna Ave., Corcoran. Burial will take place 10am Friday, April 22nd, 2022 at Calvary Cemetery, 11680 S. 10th Ave., Hanford. Services have been entrusted to Salser & Dillard Funeral Chapel. Memorial Tributes and condolences may be offered by logging onto www.salseranddillard.com.

The family of Luis Vasquez created this Life Tributes page to make it easy to share your memories.

Send flowers to the Vasquez family.