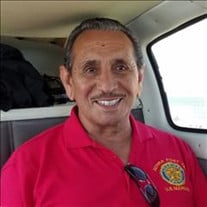 Luis Medina Jr., 75 of Visalia, California, died on October 22, 2021, in Visalia, California. Luis was born to Luis Medina Sr and Evangeline Rios on November 25, 1945 in Visalia, California. Luis spent his entire life here in the Visalia area where he graduated from Redwood High School. After which he joined the Marines, which required that he convince his parents for permission, since he was only 17 years old. He served four years in the Corps. Soon thereafter he married his first wife, Ruth Sandoval and together they raised 3 children: Johnny, Yvette and Yvonne. Luis was a man of many trades, he worked for the City of Visalia, later entered the logging industry and finally finding his passion in the restaurant business owning and operating two of his own restaurants. He also ran Medina's at the Courthouse with his wife for 15 years. He married Clemencia Vizcarra on Saturday, November 18, 2000, in Tulare, Ca and happily blended their families. Luis was a proud member of the American Legion Post 785 for over 20 years, always participating in the annual Avenue of Flags and the fireworks stand. He also served as an usher for St. Mary's Catholic Church always eager to serve his community. Luis enjoyed spending time with his family, fishing, hunting and working around the house. He never missed an opportunity to help a friend in need. He took great pride in being a Marine, the American Flag, and being true tequila connoisseur. He is survived by his spouse Clemencia Medina; two children, Yvette Espinoza (Paul) and Yvonne Arcure; four stepchildren, Belen Fajardo, Gloria Fajardo, Victor Fajardo (Nina) and Johnny Fajardo (Aime); and eight grandchildren, Alx Medina, Tasha Medina, Alyssa Espinoza, Jeremy Espinoza, Vincent Arcure, Tristy Medina, Kaitlyn Arcure and Kylie Espinoza; two great-grandchildren Cameron Medina, Regan Medina. He is also survived by 9 step grandchildren, 14 step great-grandchildren, 1 step great-great grandchild, as well as numerous nieces and nephews. Luis is also survived by his brothers Eddie and Joe Medina, sisters Letty and Dolores Medina, stepbrother John Coleman, and stepsister Margarie Coleman. He is preceded in death by his parents, Luis Medina Sr. and Evangeline Coleman, son, John Medina, brother Max Medina, and stepsister Janice Coleman. Luis will truly be missed by all. Visitation will be held 3-6pm Sunday, November 21st, 2021 at Salser & Dillard Funeral Chapel, 127 E. Caldwell Ave., Visalia with the Rosary to be prayed at 5pm. Mass of Christian Burial will be celebrated 9am Monday, November 22nd, 2021 at St. Mary's Catholic Church, 608 N. Church Street, Visalia with burial to follow at Visalia District Cemetery, 1300 W Goshen Ave, Visalia. Services have been entrusted to Salser & Dillard Funeral Chapel. Memorial Tributes and condolences may be offered by logging onto www.salseranddillard.com.

The family of Luis Medina, Jr. created this Life Tributes page to make it easy to share your memories.

Send flowers to the Medina family.