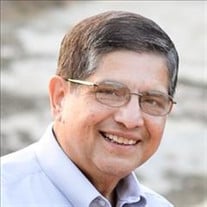 Louis "Louie" Montion, Jr. of Visalia, California entered eternal peace on April 13, 2021 at the age of 77. His wife and three children were at his side. He is survived by his wife of 57 years Teresa "Teddy" Montion and his children Richard (fiance Linda), Steve (Tammie), and Christina Montion-Stolle (Justin). He was blessed with seven grandchildren and two great-grandchildren. He is also survived by his mother Ruth Montion, sisters Mickey Casarez (Joe), Mary Ontiveros (Frank), Erma Okino (Mark), and brother Gilbert Montion (Claudia). He is preceded in death by his father Louis Sr. and brother Robert. Louie was born in Superior, Arizona on July 11, 1943. As a proud Visalian he attended Catholic elementary school, Green Acres Jr. High and was Senior Class President of his beloved Redwood High School, followed by study at College of the Sequoias. He served his country honorably in the United States Air Force from 1962-1966. He was stationed at Holloman Air Force Base in New Mexico when he met Teddy in nearby Alamogordo. Teddy saw Louie at church and knew he would be the love of her life. They were married seven months later on June 5, 1965. Back in Visalia he began a career at Electronic Business Services, a part of The Credit Bureau of Tulare County, for which he eventually served as General Manager and CEO. He remained in the industry for 45 years. He loved his community and gave back to it in many ways. He was a graduate of Leadership Visalia and served on the Visalia Citizens Advisory Committee as well as the California Futures Institute. He was appointed and later elected to the Visalia Unified School District Board of Trustees where he twice served as Board President. He was one of the founders of the Tulare/Kings Hispanic Chamber of Commerce and the Visalia Latino Rotary. He was invited to the White House on two separate occasions and in 1995 had a personal meeting with President Bill Clinton. He was honored to be recognized as part of the PTA Hall of Fame, Hispanic Educator of the Year, and Tulare/Kings Hispanic Chamber of Commerce Man of the Year. He was a people person who loved socializing. In retirement, he fulfilled this need to connect and care for others in his role at Salser and Dillard Funeral Home for five years until 2020. A highlight of his life was the time he spent coaching youth sports in Visalia including Little League Baseball for 13 years, his daughter's youth basketball team, and Pop Warner football. Later, alongside his sons, he coached Visalia Youth Football while his grandsons were on the team roster. He loved his family above all else and cherished precious breakfasts at his mother Ruth's house. He had an infectious laugh and was often called a big kid at heart. He loved the Los Angeles Dodgers, Lakers, and Rams. He was a huge fan of movies and television. He loved The Godfather, Rocky, all manner of Westerns, and you could hear him laughing down the street if he was watching Curb Your Enthusiasm. He loved keeping up with and talking politics and cared deeply about social injustices, poverty, helping children, and equality for all. In lieu of flowers please feel free to contribute to "Coach Louie Montion's Youth Sports Scholarship" to assist local athletes in need with registration fees and equipment at gofundme.com/f/coachLouieMontion A Rosary will be held at 10AM Friday, April 30 followed by a Memorial Mass at 10:30AM at St. Mary's Catholic Church in Visalia (608 N. Church St.) A Celebration of Life will take place following Mass at PPAV Hall (820 E. Main St.)

Louis "Louie" Montion, Jr. of Visalia, California entered eternal peace on April 13, 2021 at the age of 77. His wife and three children were at his side. He is survived by his wife of 57 years Teresa "Teddy" Montion and his children Richard... View Obituary & Service Information

The family of Louis "Louie" Montion created this Life Tributes page to make it easy to share your memories.

Send flowers to the Montion family.