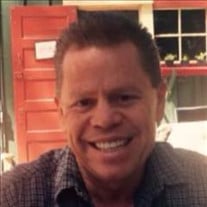 Louis James Sweet (A.K.A LJ and Louie) of Tulare, California, age 60, left this earth to be with His Savior, Jesus Christ, on February 12, 2022. Louis was born to Marcia and Louis Sweet Jr. in Inglewood, CA, on May 9, 1961. Louis grew up in Tulare and proudly attended Tulare Schools and then went on to the University of Southern California (USC), where he pursued a business degree. Louis was great at everything he did. He played trumpet and played golf in High School. He loved hunting with his Grandpa Mulock and loved harassing his sister Stacy. He was the funniest in his class and always took risks, and was adventurous. His smile and laughter were contagious. In the late 1970s, Louis did truck pulls with his yellow pickup. He then bought the Famous Instant Nut fuel altered car and started doing sand drags in the late 1980s; Louis and the racing team competed and traveled from within the county and went out as far as Mexico. In 1991 Louis moved up to asphalt with his fuel altered. In 1999 Louis and the team won the Fuel Altered National Championship. In 2001 he accomplished his dream by racing in the NHRA with his Funny Car racing across the country. He loved racing, but the camaraderie with his friends and family was even more meaningful to him. Racing and his family meant the world to him, and he would let everyone know. After returning to Tulare from USC in the early '80s, he started Sweet's Home Medical Company. After meeting the love of his life Lori Hayward Sweet in 1989, she became his life and professional partner, and they established and grew their family business in 7 locations. This included both Sweets Home Medical and Sweet's Drug Store. In 1992 these two lovebirds, Louis and Lori Hayward, were married. From this union, they had two beautiful girls, Mackenzie and Regan. Louis loved his girls and enjoyed sharing his love of hunting and fishing with them. He was a patient and kind father who wanted the very best for his girls. Our family enjoyed going to the coast house together and spending time traveling in the motorhome or flying to Wyoming to see our Wyoming family. Our fondest family memories include trips to the Cabin in Mineral King and Disneyland. He was constantly being silly or goofy, and we had a blast everywhere we went. Louis loved life and enjoyed it to the fullest. During his successful career with Sweet's Home Medical Company, which employed over 100 people, we then decided to sell our family business to Lincare (an industry that remains as an established durable medical equipment today). After that, Louis explored alternative prosperous career options and opportunities to pursue his favorite activities - racing and hunting. Louis hunted worldwide, including Africa, Mexico, Canada, Russia, and the United States. The highlights of his life were spent racing on asphalt and competing against the" big boys "in the NHRA across the country. Louis and Lori established and ran Sweet's Pawn Shop in Tulare from 2010-to 2017. His heart was relentless when it came to people and the community in need; there was a balance in how he managed business and offered support to his customers. One example of how humanitarian and compassionate he was, is when a little old lady came into the Pawn Shop and needed money in exchange for "fake Jewelry" that had no value, he could not say no to her and assisted her with money he knew he would never get back. Everyone who knew Louis knew how much he could make you laugh. His zeal and outlook on life were infectious, and he was just someone you wanted to talk to, be around and know. He excelled at everything he tried. His most admirable and proud accomplishments in his life were raising and knowing he was the best father to his two beautiful, intelligent, hardworking, compassionate, and amazing daughters. Family values, quality time, and the commitment to his wife and daughters were apparent, and there was nothing more important to him. Louis is survived by his wife of 29 years, Lori Sweet; His oldest daughter Mackenzie (and son-in-law Jacob) Locke. We are so proud and blessed to have the arrival of our new baby granddaughter - Emma James Locke. In Louis's honor, our precious granddaughter will carry his middle name and forever be Louis' Angel Baby. We know the remarkable timing of our first granddaughter was all in Gods' timing for our hearts. He is also survived by his youngest daughter Regan Sweet (and fiance Reiley Johnstone), Sister Stacy (and brother-in-law Randy) Castro of Los Osos, and nephews Cain and Chad Castro. Additionally, Lori's extended Hayward family in Wyoming. Louis expressed many times how deeply grateful and excited he was, knowing that his wife would always be the solid and loving force for his daughters and grandchildren. He also expressed his gratitude for the strong men who will continue to care for his pride and joy, Mackenzie and Regan. We love you, Louis; we will forever honor our memories, the laughter, the hard work, the love and life we shared together. Louis was preceded in death by his parents - Louis Sweet Jr and Marcia Sweet. A Celebration of Life will be held Thursday, March 3, from 11 am - 3 pm at the TDES Portuguese Hall in Tulare located at 515 N I St. In lieu of flowers, gifts and contributions can be made in Louis Sweet's name to the Fran Peterson Hospice Foundation, 5323 West Hillsdale Visalia CA 93291. Services have been entrusted to Salser & Dillard Funeral Chapel. Memorial Tributes and condolences may be offered by logging onto www.salseranddillard.com.

Louis James Sweet (A.K.A LJ and Louie) of Tulare, California, age 60, left this earth to be with His Savior, Jesus Christ, on February 12, 2022. Louis was born to Marcia and Louis Sweet Jr. in Inglewood, CA, on May 9, 1961. Louis grew up... View Obituary & Service Information

The family of Louis Sweet created this Life Tributes page to make it easy to share your memories.

Louis James Sweet (A.K.A LJ and Louie) of Tulare, California,...

Send flowers to the Sweet family.