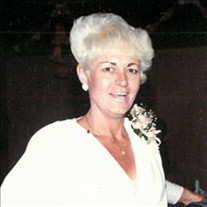 Loretta May Bethel passed away Wednesday October 6th, 2021, at home with her family by her side. She lost her battle with cancer at the age of 80. She was born on March 17th 1941, in Hanford, Ca. She was preceded in death by her parents, Perry and Eunice Cotton, her brother Gene Cotton and her beloved husband of 56 years, Bernard Bethel. Loretta is survived by her daughter, Liz Henderson; son-in-law, Dave Henderson; and her one and only grandson, Matthew Henderson. She is also survived by her nephews, Neal Cotton and Shane Cotton Chavez. Growing up in the Cotton family, Loretta was taught to have a strong work ethic. She would recall the numerous mornings as a young girl when she was up before the sun rose and heading out the door with her dad, Perry to work on the ranch. In her teens, she was a proud member of the Visalia Rockettes, an equestrian drill team where she forged lifelong friendships. Shortly after graduating from Mt. Whitney High School in 1959, she married her high school sweetheart, Bernard Bethel. They settled in Tulare Ca where Loretta turned a little run-down house into a beautiful home. In 1967, while residing in Tulare, Loretta and Bernard welcomed their daughter, Elizabeth. Loretta received her cosmetology license in the early 1970's and for the next few years she was a hairstylist at a Tulare salon. She then moved her regular clients to her in-home beauty salon where she could concentrate more on her primary passion which was being a wife and a homemaker. Loretta had a true talent for creating beautiful decor in her homes and yards. Honestly, she could have had many of her rooms and yards featured in Better Homes and Gardens. Loretta's other passion in life was spending time with her mom and dad during the heyday of the thoroughbred horseracing career. Loretta and her family experienced decades of fun and excitement as they traveled up and down California hoping to get in another win picture with mom and dad. The Bethel's dabbled in the horseracing business themselves. When Loretta and her family purchased acreage on Mehrten Dr., outside of Exeter, she volunteered to take on some of the responsibility of helping with the family business of raising thoroughbred race horses as she boarded and cared for the brood mares and colts. Loretta enjoyed the hands-on experience; helping to raise some of the colts that would soon be heading to the track to begin training with her dad, Perry. This brought her great joy as she felt a return to her roots. Loretta was a loving caregiver to her family. She took care of her daughter when she had her spinal surgeries. She would go on to take care of family as they aged. She took care of her parents, her Aunt Marion and Uncle Gerald and lastly, she cared for her husband till his passing. Loretta will always be known for her beautiful smile, her holiday meals and of course her exquisite hair. Through the years, her hair may have changed in height and color but it remained as unique and as special as she was. No matter where we would go, people would remark. . . "Who does your hair?" or "I just love your hair!" Loretta loved her family and friends. She so enjoyed laughing and reminiscing with her family and especially her cousins. We will miss her so much!! Until we see you again Love, Your Daughter A Celebration of Life for Loretta will be held at Crawdaddys on Wednesday, December 15, 2021 at 2:00 pm. Location is 333 E Main St. in Visalia. Crawdaddys is on the corner of Main St. and S. Bridge St. Services have been entrusted to Salser & Dillard Funeral Chapel. Memorial Tributes and condolences may be offered by logging onto www.salseranddillard.com.

Loretta May Bethel passed away Wednesday October 6th, 2021, at home with her family by her side. She lost her battle with cancer at the age of 80. She was born on March 17th 1941, in Hanford, Ca. She was preceded in death by her parents, Perry... View Obituary & Service Information

The family of Loretta May Bethel created this Life Tributes page to make it easy to share your memories.

Loretta May Bethel passed away Wednesday October 6th, 2021, at...

Send flowers to the Bethel family.